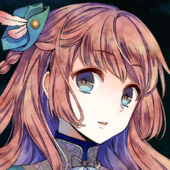 Looking for her missing brother Shiki, Kazuha begins to play the video game “Arcadia,” and becomes trapped in the game world. She is loyal and obedient, but strong enough to voice her opinions when challenged. After an unexpected turn of events force her to become the “Almighty,” both Angels and Demons start to see her as a possession to be acquired. She works hard to progress through their adventure, and assists her allies as a Minstrel.

Both Kazuha's real name and in-game name can be changed, though other characters pronounce it if it isn't. While she attempts to start the game as part of the Demon faction in order to join Hiroya, she finds herself in the role of the "Almighty," a mysterious weapon that belongs to neither faction. Her class as a Minstrel, while lacking in combat ability, allows her to play a harp that gives her access to numerous supportive skills (such as slowing the enemy down or putting them to sleep).