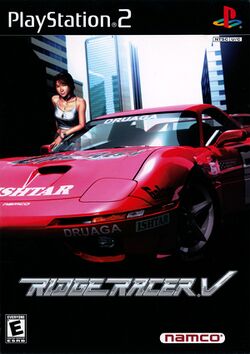 Ridge Racer V is a racing game that was released by Namco for the Sony PlayStation 2 in Japan on March 4, 2000, and in the United States on October 25 of the same year; it is the seventh (and fourth direct-to-console) game for the company's Ridge Racer series, and shifts the "Grand Prix" and "Time Attack" modes to under a new "Race Mode" heading, as well as introducing a new "Free Run" mode under that same heading where a player can race alone on the tracks to help familiarize himself with them. It also introduces a new "Design" mode, where a player may change his team's name and the colour scheme of his car - and the "Garage" mode from the previous title, in which a player can look at all cars, engines and trophies he has currently unlocked in the game also makes a reappearance.

There's seven new tracks in the game: "Above the City", "Airport Oval", "Bayside Line", "Greenfield", "Outer Pass", "Park Town", and "Sunny Beach", with five new races for Grand Prix mode: "Standard Basis GP", "The Heroic GP", "Blast GP", "Knight GP", and "The Throne GP"; there's also fifteen new cars (five of which are piloted in by Pac-Man and the four original members of the ghost gang but by now Namco Hometek had given Pinky his sex change), and seventeen new engines (three of which are named "E.O."). Finally, if you manage to beat the best times of the four CPU opponents "Angel", "Devil", "Pluto" (not the planet) and "Spirit" in Time Attack mode, you can race against them in "Duel Mode" and must beat them in order to win - and there is also a "99 Trial" mode in which you will find yourself against thirteen CPU-controlled cars upon the Sunny Beach track for a ninety-nine-lap race.