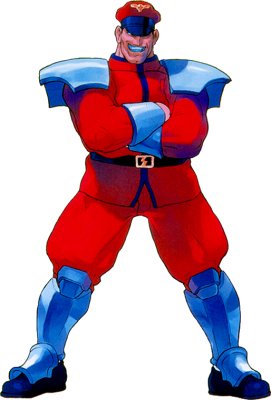 M. Bison is in the process of developing his crime syndicate and underground army called Shadowloo. He is looking for particularly skilled and deadly fighters to join his ranks. After the first Street Fighter tournament, M. Bison recruits Sagat, who is devastated by the loss of his title as champion to Ryu. Bison determines that an efficient way of attracting that kind of talent is to host another worldwide Street Fighting tournament.

Bison watches the matches with a keen eye, and he is delighted to see that Ryu has entered the tournament as well. After overhearing a discussion between Ryu and a man in a dark gi, he approaches Ryu and asks him if he would like to join Bison's organization. An angry Ryu passes, seeming only interested in trying to track down the man he just spoke to. Bison is disappointed with his response, and insists that if Ryu does not join Shadowloo of his own free will, Bison will see to it that he perishes. They launch into a fight and Bison uses the information he overheard about the death of Ryu's master to antogonize him. Bison senses a strange reaction in Ryu, and realizes that Ryu's peaceful mind has been replaced with a mind preoccupied by murder and death.

Bison uses this to his advantage and assures Ryu that he will have the chance to kill all that stand in his way if he joins Shadowloo. Ryu half heartedly accepts, and Bison decides to test Ryu's will by pitting him against his own friend from childhood, Ken. However, Ken is able to snap Ryu's mind back to his old self. Bison is disappointed that the effect did not last, and decides to kill them both at once. Ken and Ryu fight back and defeat Bison. He sees a member of the US Air Force and an interpol agent enter the room at that time, and he hits a button that allows him to escape through a sink hole in the floor.

Months later, Bison is surprised to hear from Sagat that another EX tournament is being held, and even more surprised to find out that Sagat insists on being allowed to rematch Ryu. Bison, furious that someone dared to usurp control of his tournament away from him, sends Cracker Jack and Vega to investigate the circumstances surrounding the tournament. He discovers that a tyrant going by the name Shadow Geist has arranged the tournament. Vega intends to put an end to it. Along the way he learns of a another fighter similar to Ryu who seems to be in the same altered state of mind. Before approaching him, Sagat yet again pleads for a chance for a rematch with Ryu. Bison consents to prevent Sagat from annoying him any further, and advances to meet Kairi. Just as he was about to engage Kairi in a fight, he was knocked out by an attack from a being that he could not sense. He lost consciousness briefly, but when he awoke, he saw Kairi fighting against a rather demonic looking being.

Outraged by the being's audacity to interrupt Bison's fight, he used the Psycho Crusher attack on Garuda, and prevented Garuda from completing his fight with Kairi. They fought for some time, and Garuda executed the Soukon Dan attack on Bison. Rather than harming Bison, the souls joined with him and enhanced his Psycho Power. Garuda, not understanding what happened, fled the arena. When Bison looked around, Kairi was gone. At that moment, Chun-Li rushed in. Passionate about the chance to avenge her father's death at Bison's hands, she rushed in to attack. But Bison, in his enhanced state, was far more powerful than Chun-Li anticipated, and she was nearly killed as a consequence. When Bison was informed that Shadow Geist was getting away, he left Chun-Li to her fate and walked away.

Still bent on finding new soldiers for his army, he declares the third EX tournament, and changes the rules so that all fighters must enter with a partner. He does this in order to use Vega as a spy while at the same time, making it appear that Vega is simply his partner. He knows that Shadow Geist will be unable to refuse the opportunity to return, and he eagerly awaits the chance to punish Geist once and for all.