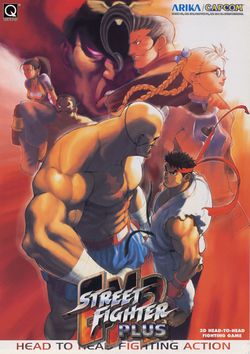 Street Fighter EX2 Plus is an arcade game developed by Arika and published by Capcom in 1999. It was the follow up to Street Fighter EX2. It keeps the same improved graphics engine over the original Street Fighter EX, and the new Excel Combos, while increasing the roster of fighters (which finally includes Sagat), introducing some new characters, and adding new gameplay elements between fights.