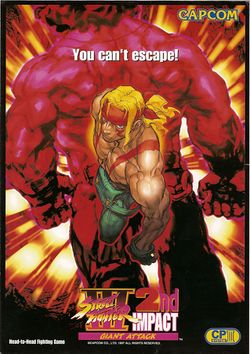 Hugo and Urien are the two new fighters. Hugo is actually taken straight from Capcom's Final Fight series, as one of the hulking Andore family, along with his wrestling manager, Poison. Urien is actually the younger brother of the Street Fighter III boss, Gill, with an ax to grind. Among the cast changes, Yun is given a distinct character selection space from his brother Yang, and they become independent characters with similar, but differing move sets.

Parries are still the new feature of the game, but 2nd Impact also brings another new feature, transported over from the Darkstalker series: the concept of EX moves. Some special moves can be enhanced by pressing more than one button when executing the move. The cost of performing an EX move is a small portion of your Super Art gauge. This expands available strategy by forcing players to choose between spending power on single Super Art attacks or a barrage of EX moves.