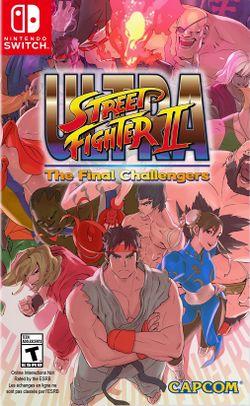 All seventeen characters from Super Turbo return, with Akuma available from the start. Ultra also adds Evil Ryu from Street Fighter Alpha 2 and Violent Ken from SVC Chaos: SNK vs. Capcom. Shin Akuma from Alpha 2 is also available with a code. The "old" Super versions of the other characters were removed. The balance of the game has been adjusted again, adding throw breaks and making some inputs easier. The game is playable with the original graphics and sound, or the redrawn graphics from Super Street Fighter II Turbo HD Remix, a newly arranged soundtrack, and the Japanese voices from Street Fighter IV. The endings in arcade mode are always the ones from HD Remix.

Buddy Battle is like Dramatic Battle from Street Fighter Alpha, where two players fight cooperatively against the computer. Both players have their own Super gauge but share the same lifebar, which is only partially restored after each round.

In Color Edit up to 10 custom palettes may be stored per character, but only one is "active" and selectable. Colors are chosen from a menu instead of each button having its own color.

"Way of the Hado" is a new mode where a single player controls Ryu and fights against Shadaloo, using the Joy-Cons to perform special moves.