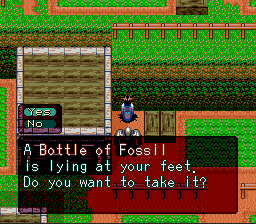 Stock up on these items, especially those that correspond to Rune powers and spells that your characters cannot learn. I found clarifying to divide items in four groups according to the corresponding spells:

Sorting items by Item shops you can see at a glance how early you can get a specific item. Sorting by Ch.10 you can see which items will be available in that chapter, where you cannot access previous item shops.

If your party is defeated, the monsters will take half the money, but no jewels. This can be a useful way to save money.

Many monsters drop Opals. Since you can carry up to nine of each item, sell all opals you get: if you already carry the maximum, you'll have to give up some. The three species of Tricks always drop any one jewel, except for Opals and Diamonds.

A kid in Dowaine sells random items for 100 G each, including Pearls that can be sold for 200 G.

These items are found in every role-playing video-game by Enix! In a few Enix (or Square Enix) games they have a different name, but they have the same effect.

Seeds cannot be bought (but they can be sold for 500 G each). Give them all to your main character, because he will be alone in some of the toughest battles. Each set of three Power+Agility+Protect seeds has roughly the same effect as if your character advanced by one experience level.

These items cannot be bought or sold.

The temporary party members do not join in battle, but they are necessary to proceed with the plot. Therefore, their role is similar to plot items.

These are the goal of the videogame.