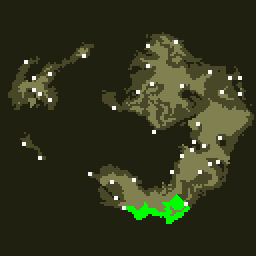 Map of Ticondera; the area of this chapter is highlighted in green.

You should try to be at about level 16 at the beginning of this chapter. 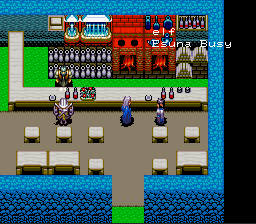 Patrof is one of the candidate hometowns of Esuna, the elf girl.

When you enter the town of Patrof, the streets are vacant. The two people at the front say you should leave because something terrible happened.

In Patrof, there is an Inn and shops that you can use to upgrade your equipment. There is also a free bottle of Magic Water by searching the piles of wood in the bar.

You can learn in the house of healing that there is a hidden entrance to the castle within the town. If you search the graves on the right, one says not to disturb the tombstone: push this up (by moving against it) to reveal the secret entrance.

New items sold in shops are highlighted in green. 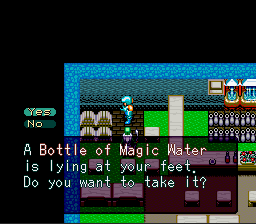 Hidden item in the tavern.

The dungeons to castle Patrof are infested by extremely fast centipedes called "spideks"[1], furthermore these are capable of poisoning your party. You definitely want to stock up antidotes, and also control one character who can cast Purify. Here they are summarized according to the level at which they learn the spell: 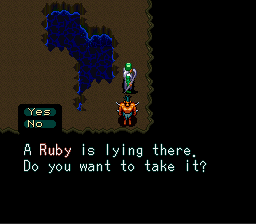 Hidden item in the second area.

Purchase at least one Exigate in the Item shop, then start exploring the dungeon. The Spidek monsters are annoyingly fast, but they can be petrified. The five Red Tricks are quite strong, so you'd better decide to escape after each fight or so using an Exigate. Even if you escape from the dungeon, the experience and gold remain, so you can eventually earn one or two levels during successive explorations.

After the five Red Tricks, the third area of the dungeon is totally free of chests, so you can rush through it until you emerge in the castle.

When you reach the main castle, it appears to be empty beyond a few treasure chests. On the top floor you will find one of King Lemele's apprentices. You will need to defeat the apprentice in one-on-one combat to obtain the rune, but there's no hurry: pretend to accept his offer, and he'll open the castle gates. Now you are free to go back in town, rest at the inn and easily go back to him at full power.

Duel-break trick
Valsu should have learned the Revive 1 spell by now. If he's in your team, leave town, let your other character die, then come back and challenge the traitor. Cast Revive1, and your ally will join in the duel.

Three other characters learn the same spell, but at far higher levels, therefore it's unlikely they can use this trick now. Also, the trick does not work using a bottle of Magic Water.

Lux and Esuna cannot be the traitor apprentice.

Start the fight drinking three bottles in this order: Protection, Agility and Power. Keep healing with the Rune and the Potions-2, because the opponent's spells can defeat you in two hits.

When the opponent's Health Points drop to about 30%-40%, he'll use a healing spell, that replenishes 40 or 90 HP. In order to defeat him, you have to charge up a powerful blow. The enemy attacks repeatedly with his strongest attack, then he attacks twice with a weaker one: that is the moment to defend&attack.

After the battle, the traitor drops the Star Rune, the third one out of the seven.

When the traitor is defeated, some townsmen will inform you of the city of Bone to the north-east.