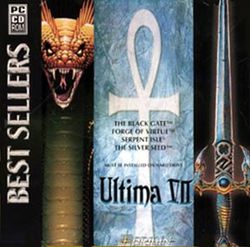 The Complete Ultima VII was Origin Systems' first North American CD-ROM title (their very first was the Japan-only FM Towns version of Ultima VI: The False Prophet). An earlier and less common version titled Ultima VII Complete was also made, sold in the Ultima VII Part Two: Serpent Isle box but with a sticker to indicate it was "complete" with "all 4 episodes". Both versions contain all four components of the Ultima VII saga:

The games' documentation is intact but the cloth maps were replaced with paper, and it does not include the usual trinkets.