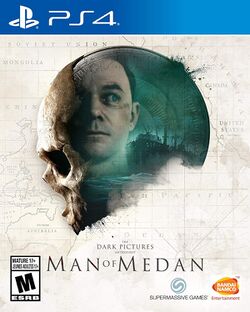 The Dark Pictures Anthology: Man of Medan, also known simply as Man of Medan, is an interactive drama survival horror video game developed by Supermassive Games and published by Bandai Namco Entertainment. It is the first of eight planned installments in The Dark Pictures Anthology series, and was released for Microsoft Windows, PlayStation 4, and Xbox One on August 30, 2019. A successor, Little Hope, was released on October 30, 2020.

The main plot of Man of Medan is presented as an unfinished story in the possession of the omnipresent Curator (Pip Torrens), who requests the player's assistance in completing it. Decisions made by the player alter the outcome of the story and the fates of its characters.

Man of Medan was inspired by the urban legend of the SS Ourang Medan, which is about a ghost ship that had allegedly become a shipwreck in Dutch East Indies waters in the late 1940s. Its entire crew was found deceased under suspicious and mysterious circumstances, with their faces twisted into horrified expressions, which seemed to indicate that they were terrified and had suffered before passing, despite having no visible signs of injury to their bodies and the ship being seemingly unscathed.

Inspired by the popularity of their 2015 game Until Dawn's streaming, and the number of people playing the game with their friends by sharing the controls, Supermassive Games introduced two different multiplayer modes in The Dark Pictures Anthology: Man of Medan titled "Shared Story" and "Movie Night". Shared Story allows two players to play cooperatively online. Movie Night allows up to five players to select their own characters and prompts them to pass the controller at each turn.

The Curator's story centers on five individuals partaking in an underwater diving expedition to find a submerged WWII plane wreck in the South Pacific Ocean: brothers Alex (Kareem Alleyne) and Brad Smith (Chris Sandiford), Alex's girlfriend Julia (Arielle Palik), Julia's brother Conrad (Shawn Ashmore), and Félicité "Fliss" DuBois (Ayisha Issa), the captain of the group's dive boat. The expedition quickly turns dangerous, however, when the five are taken hostage by pirates Olson (Kwasi Songui), Junior (Chimwemwe Miller), and Danny (Russell Yuen). Against their will, the group is brought to a large ghost ship – the fabled Indonesian Ourang Medan – where their worst nightmares become reality. With their safety threatened, their sanity tested, and their survival at stake, the five must make swift life-or-death choices that could either lead them to freedom or cause them to suffer fatal consequences.