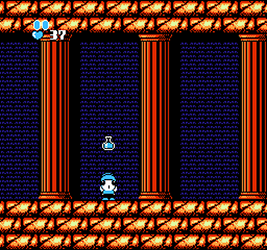 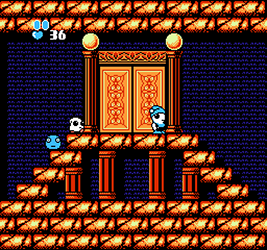 You will find yourself where you got the Power of Insight. Your next destination is to the left of the area where you started the game. To get there, you can take a small shortcut. Drop down until you enter the ice cave. Proceed to the left and let yourself fall into the first small precipice you will encounter. Enter the door. You will find yourself in an area similar to a temple. Proceed to the left, killing the clowns. You will find a chest containing a Medicine. Note: you can only have one Medicine at a time. If you take another one when you already have one in your inventory, it will be lost forever. While the Medicine chests will be listed in this walkthrough when you find them, only take them if you need them. If not, you can come back for them later. In the center of this area you will notice a giant gate, this is what Shades told you about. A message will inform you that it can only be opened with the three magic keys. At the moment you won't have one, so ignore it. Proceed to the left until you come out in a rocky area. 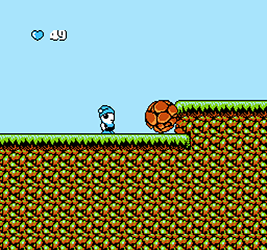 The rock to push 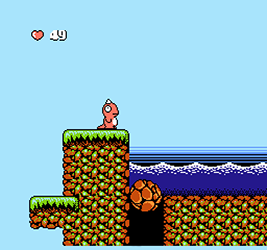 Stop the waterfall with the rock

Let yourself fall down. Proceeding to the right, you would arrive at the area where you started the game. Climb the wall on the left instead, with Bop Louie's suction cup. Proceed to the left, using Freeon-Leon to cross the pond and climb the wall above. Continue to proceed to the left, climbing the rocky walls and passing the pools of water. You will come to a point where there is a moving platform above some thorny ground. Use the platform to reach the left wall and climb it. Halfway up, you will notice platforms on the right; detach yourself from the wall and climb on them. From here, you will need to reach the protruding wall on the left. To do this, you should use Shades and its ability to glide. Have Shades jump to reach the wall, then, when you are up against it, quickly switch to Bop-Louie, to take advantage of his suction cup. This is a technique that you will have to master. After climbing this wall, you'll have to take a long jump to reach the platform on the right, with a lip-like monster above. Climb the wall on the right to reach a lake. Cross the lake using Freeon-Leon and proceed to the right until you find a strange rock. A message will tell you that to move it you will have to jump on it, like when attacking an enemy. Then jump on the rock repeatedly to move it to the left. Keep jumping on it even when the rock ends up in the water, to finally close the hole from which the waterfall begins. Now that you have stopped the waterfall, drop down to the right, where there was a lake before. Jump into the dried up lake and take the tunnel to the right. Follow the path, climbing the walls using Bop-Louie's suction cup and at the bottom you will find the last of your friends, Gil. 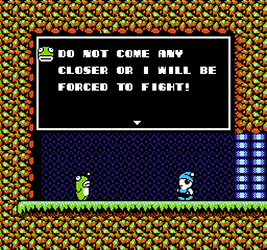 Gil will also attack you and the fight will be the same as the previous ones, in dodgeball style. After hitting Gil 8 times, he will regain his memory and join you. He too will mention the temple gate and the keys you will need to find to get back to Ufouria. One of the keys is nearby and would be accessible right now. However, the key in question is guarded by a powerful boss and you will still have to return to this area later, so it is advisable to postpone the search for the keys until later, when you have more life points thanks to the Life Containers.