This isn't necessarily one of the harder flying stages, but it can be difficult to keep your health meter full enough for the boss battle. Do your best to avoid collisions in order to have as much health as possible by the end. You start flying through the air as enemies appear from the right. The first enemies loop through the air when they reach the middle of the screen.

As soon as the first P capsule appears, an enemy appears from the left side of the screen. Let it get out towards the middle, and then start blasting it so that you destroy it as quickly as possible. These enemies eventually cause the screen to flash, doing damage to Apollo. As you defeat it, another enemy appears. They stick to the top of the screen and drop down when Apollo gets close. 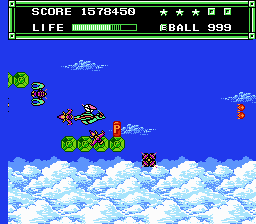 After an S capsule goes by, a new enemy type will appear. They fly forward, and then appear to bounce off an invisible wall before rushing forward at a new height. They may "bounce" up or down, depending on where Apollo is. These enemies can be tough to avoid, so use your bombs. By the time a second P capsule appears, a jet will fly up from the bottom of the screen. The second P capsule will upgrade your main weapons and give you a second shot forward.

The first face will assemble. Do your best to destroy it as quickly as possible after it comes together. While it's doing that, a second screen-flashing enemy will appear from the left. Destroy this quickly too, before it has a chance to remove more of your health. After an S capsule goes by, the screen will start to darken and a second face will begin to form. You can safely ignore this face, since the speed will pick up, and the face will be scrolled off the screen before it's a threat.

The screen will go black, and the fast scrolling section of the stage will begin. You have to avoid a series of red spiked columns. There are two columns that form a gate in the middle of the screen. If you line yourself up with that gate successfully, you can safely make it through this portion of the stage unharmed. Just be sure to fire as rapidly as possible to destroy any threats that fly in your direction while you proceed to the boss. 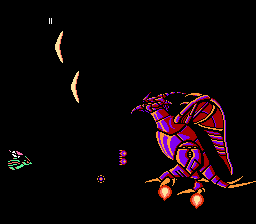 The boss of this stage is a giant bird. It doesn't have a lot of offensive options, but what it lacks in quantity, it makes up for in quality: Either of this boss's two attacks can do a lot of damage if they hit, so you must do your best to avoid getting struck.

The bird simply flies up and down along the right side of screen. It has two main attacks. The first are two wide beams that fly straight forward. These are launched from it's head and feet. The second attack is a pair of bullets which it shoots from its beak. The bullets are a little more aimed towards Apollo, but they have a much harder time hitting him if he happens to be higher up, so you're safest attacking near the top of the screen, and letting your bombs do most of the work. If you lead the boss up and down the screen, you can also get in a number of shots without having to worry about the beams too much, but you'll still have to be careful of the bullets.