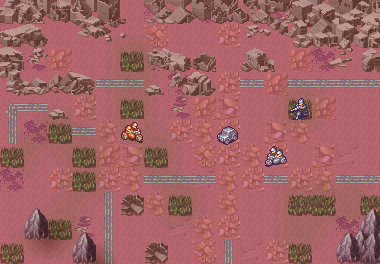 Will climbs out of the wreckage of a destroyed Rubinelle military training camp and looks upon the devastated Earth. As he looks around, he finally spots other survivors—although they are not the friendly kind. He finds The Beast, leader of a group of raiders, who decides to murder Will and steal all he's got. As Will begins to flee, Captain Brenner and his second-in-command, First Lieutenant Lin, of the 12th Battalion (a.k.a. "Brenner's Wolves") arrive. The 12th Battalion, a group of former Rubinelle military personal, are committed to saving as many of the survivors as possible and offer their aid to Will. Brenner and Lin work together to destroy The Beast's ragtag units. After being saved by Brenner, Will decides to join the 12th Battalion.

This stage is pretty straight forward and the in-game tutorial will guide you though. Don't worry, you can't really be defeated here if you use common sense.

When you first start off, you have Will in the motorbike against an infantry, recon and a motorbike. Follow the on screen direction and move your motorbike as far left as you can then end your go (by going onto the map menu and clicking 'end turn'). In the next turn, your reinforcement in the form of a tank and a recon arrives from the left. The motorbike will now move off the screen leaving you with the tank and recon.

As the enemy recon is closest, have both of your units attack and destroy it. The remaining bike and infantry can be taken in any order and ought not pose any real threat to your vehicles. Finish them up and by the end of Day 4 this little skirmish should be over.

Once you have destroyed the enemy units, you should earn yourself a nice S Rank for this simple mission.