Advance Wars: Days of Ruin/Moving On

Low on supplies, The Beast sets out to raid another village. Meanwhile, Lin confirms the Mayor's story that the raiders are operating out of an abandoned military base. She and Brenner then set into motion a plan to "put them down". When The Beast is alerted to the presence of Brenner's Wolves, Lin steps in to take the reigns. Using her skill in intelligence and reconnaissance, she leads her forces through the thick, black dust of the Fog of War. 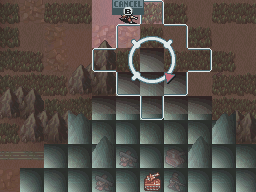 Fire a flare at this location to reveal hidden enemy units.

This is the first mission involving the Fog of War (FoW). FoW not only conceals enemies from sight, it also prevents you from firing on hidden targets whether you know they are there or not. To counter this, you have been provided with a flare unit that can (temporarily) cut through the Fog of War. All enemies on this map are to the north of the mountain range, so there's no need to spread your forces thin checking the south. Start by selecting your flare unit and sending a flare up as far north as you can. This reveals an enemy mech and bike just south of your scouts in unit Bravo. Bring your scout down to engage the enemy mech, but make sure your path moves along the western edge of your infantry's movement range. Following this wide path will reveal a hidden enemy recon unit to the west. 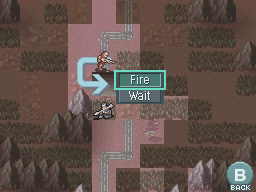 Move out wide en route to your target to reveal an enemy.

Move your recon to the north and attack the mech you've already softened up. This will either completely destroy it, or at least leave it with only about 1 HP. Next, move your artillery north one space and hold to reveal another enemy bike. Attack this bike from the west with your nearest mech unit and finish it off with a tank attack from the north. With the enemy bike destroyed, move your own bike north to join up with the rest of your units. You may want to move your remaining infantry into the mountains for improved sight and protection. End your turn. When The Beast attacks, it's unlikely he'll do much damage, though your scout will more than likely end up dead.

If the enemy's northern mech is still alive at this point, finish it with your recon. You should be able to fire upon the enemy bike with your artillery and finish the job with your nearest infantry unit. Obliterate the nearest recon with your tank, then move the rest of your units north.

The enemy should now have only one recon remaining. Finish it off however you like, so long as you don't get any units killed, and you should be rewarded with yet another S Rank.