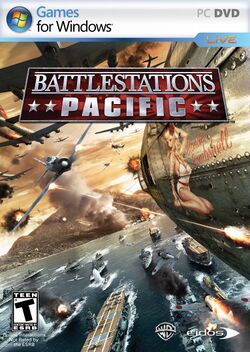 There are many changes from Midway to Pacific. There are several new modes and playable aircraft, as well as several minor changes such as improved graphics and sound, as well as improved gun lights that now show how much longer a gun has to reload for. Planes are considerably less manoeuvrable and can fly considerably higher than before.

Kamikaze aircraft make their first appearance here, and although crashing a non-kamikaze plane into a target causes minimal damage, a single kamikaze aircraft can destroy a landing vessel. Various screens have been vastly simplified - the repair screen has been reduced considerably, and the Tactical Map has larger and more stylish icons.

Note that this game installs SecuROM as copy protection, and Games for Windows Live in order to even keep your options. Before getting the game, players should be prepared to handle potential errors regarding these two third-party applications.

The community at large remains divided, with some claiming that its spirit has lost since Midway - citing particularly the aircraft automatically replenishing their weapons (though this can be toggled on and off) and semi-automatic aiming that proved controversial with many well-established players. Others cite the positives and maintain that the game is a success.

Although the community remains divided, a lot of players strongly believe that the game is an overall improvement from its previous incarnation.

Be aware that while the game makes a few efforts to remain accurate to history, this guide does not. Invariably, data presented here may or may not be historically accurate. Please do not attempt to correct this information, as this guide's purpose is to follow a video game, and not be a tried-and-true encyclopedia. Modifications from history include the G4M Betty carrying an unreasonable payload and having far more armour than in reality, and some ship types being misrepresented.

For information on getting started in multiplayer, please read the Multiplayer section.

A single player demo was released for Battlestations Pacific, featuring three maps: Divine Winds of Leyte, a Siege Mode map, and an Island Capture map. Neither the Xbox 360 nor the PC version demos have multiplayer functionality, nor do they have a method of saving controls, meaning the saves would be lost upon shutting down the game.

A second patch was released, although with no patch notes its effects are largely unknown. The game is currently at version 1.2.

Three DLCs are available for Battlestations: Pacific. The first is the Volcano Island map pack, which includes two new maps. The Mustang pack includes new units - the P-51 Mustang, the Kuma-class Torpedo variant, and both the Montana and Super Yamato-class battleships, among others. For additional information, look at the units section. The third, just recently released, is the Carrier map pack, which features four new maps centered around carrier battles.