Although, Kashian said that Toronto is to the west, that town is actually to the south-east. Keep this in mind if you want to get there quickly. On the other hand, if you want to gain some extra gold and experience, hug the western walls. 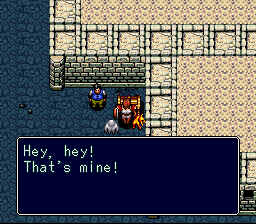 Now you can open this chest in the Tower of Light.

The first person you meet directs you towards the inn, where you can save the game. Meister, the jade merchant, is in a room of this inn. There are no enemies in town, therefore feel free to equip an axe (to break pots and get items) and the cape (to walk faster).

Reubens and the silver plaque[edit]

Someone in the Arcs inn spoke about Reubens, a man from Toronto, who was looking for items from the Abell civilization. That means the silver plaque you found after beating the ruins dungeon. In Toronto, the building straight south of the inn hosts the Tool shop, where you can sell some surplus item obtained breaking pots. The shopkeeper also directs you to the Stonemason, who could know about the silver plaque. This character is found next door, at the Weapons shop. He will redirect you to Reubens the librarian. Leave the stonemason shop and keep walking east following the road. A woman tells you about Vanessa's house. If you enter there now, you'll learn that Vanessa was kidnapped by goblins. Rein hurries to her rescue without even asking where are the goblins. Leave Vanessa's and keep walking east and north along the road. Talk to a man who tells about the library nearby: that's the building we're looking for. In the library, talk to the man there: he's Reuben himself! He will trade your silver plaque for the Life jade

, that contains the fairy Ason. 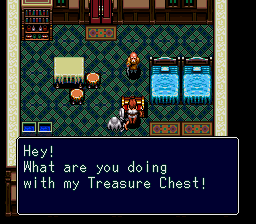 You can open this chest later.

Reuben the librarian asks for some time to decipher the silver plaque. In the meanwhile, he suggests you to have fun at the arena. The arena is in the building nort-west of the library, across the canal. Talk to the people on the ground floor, and one of them grants you access to the arena downstairs. Now you can bet on the fighters, but you cannot fight yourself yet. In order to fight, you have to talk to the owner. Therefore, walk upstairs. On the upper floor of the building you can meet the owner. He denies everything, but he has a problem: the key for his chest is broken. A woman downstairs says that the stonemason was a locksmith before he became a weapons merchant, so let's ask him. The stonemason grants you permission to open his chests, where you can find two duplicate keys. Give one to the arena owner, and he'll relay you to the people in the arena. You want to talk to the man behind the counter. To do so, walk around the end of the counter that is hidden by the wall. In the fighters waiting room, they'll ask you to wait more. Use the second duplicate key to unlock the door and defeat the fighter in there: this way, a fighting slot becomes free for you (same as in Lone Wolf and the Voyage of the Moonstone, published the same year).

Remember that you don't heal between subsequent matches! Here's a list of some opponents you can meet. Default sorting is by prize; use Ctrl+F to find a specific opponent, and you'll see how good is the prize for beating him.

After the arena, you can go back and visit Reubens the librarian. He's downstairs now. He's still working on the silver plaque translation, but you can read the books in the library. Beware: some shelves are covered in poisonous dust. Still, read everything and check every shelf before using an antidote herb. Indeed, you cannot get more poisoned if you're poisoned already. The Magic shop is between the library and the arena, in the north-east corner of Toronto. Talk to all the people in the two large houses between the library and the inn. They will complete the information you need about Toronto and its troubles.

When you're finished, go back to the inn. Ferris said that Barness is waiting on the first floor, but he's actually on the ground floor, not on the upper one.