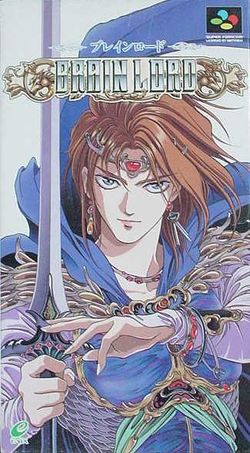 Brain Lord is an Action RPG focused on puzzles developed by Produce and published by Enix in 1994. It is lesser-known and less popular than Soul Blazer, Terranigma, ActRaiser, Dragon Warrior V and many other games that gained far more notoriety.

Brain Lord concentrates heavily on puzzles (hence its name), with combat almost as an aside. Some of the puzzles are extremely easy while others are very frustrating indeed. It also featured an innovative system of magical helpers known as Jades that could be summoned from various precious stones found or bought throughout the game world. These Jades can light dark areas or fight or perform various other tasks, and can even level up (quite like Pokémon) after gathering enough experience spheres. This is somewhat odd, given that the main character does not level up at all (like Pokémon, indeed). Instead, he becomes more powerful from better equipment and spells, or by using items that increase his power, defense and health meter (as in The Legend of Zelda).

You are Remeer, the last generation of your family to go looking for a dragon. Hundreds of years ago, people flew around on dragons. Members of your tribe were known as Dragon Warriors. Each person in the tribe would find a dragon and train it to be his partner. Together they were very powerful. One day the members of the tribe were drawn into a great battle where many of them perished.

Remeer can't let the bloodline perish. His father learned in his travels that there is a dragon in a place called the Tower of Light. He said a few other things then he left to find the dragon in the aforementioned tower. And he never came back...