The Fishmen return in force as you plunge to the underground depths of the castle. Bats will fly about at the most inconvenient moments while you ride platforms only inches above the water. When you rise to the surface, Fleamen will assail you as they drop from the claws of giant Eagles. And before you can face Frankenstein's Monster and his diminutive keeper Igor, you will be challenged by a slew of fire-breathing dragon skeletons.

After descending to the underground tunnel of the castle where the Fishmen make their home, you will need to make use of the floating platforms that will ferry you over the deadly water below. With a continuous stream of Bats and Fishmen attacking you, you will have to chose the timing of your leaps very carefully. 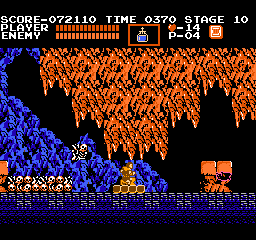 Crouching is the only way to pass this rocky obstacle

At first, you may think that this stage is void of enemies. Then a large Eagle will appear, clutching a Fleaman in its talons. It will drop the Fleaman near you and then fly off. Then another will appear, and another, until the sky is full of Eagles. And when it's finally over, you'll come face to face with a Bone Dragon. 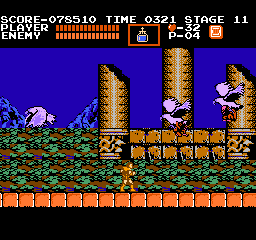 Stand at just the right distance to whip the Fleamen

This seemingly desolate sewer tunnel has exactly four occupants, and two of them are the guardian Frankenstein's Monster along with his handler, Igor. The other two are Bone Dragons. Although these long necks with fangs can't harm you unless you get too close, they are difficult to kill and can do quite a bit of damage with their fireball attack. Don't underestimate them. 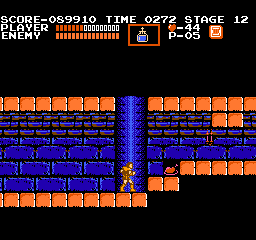 Grab this hidden food before you face the boss

Frankenstein's Monster and his little companion, Igor, are truly reanimated by your arrival in their hall. Although The Monster has certainly been bulking up, the real threat comes from Igor, who leaps off The Monster's shoulders and attacks you with fireballs. If you've managed to hold on to either the Holy Water or Boomerang all this time, you can do a lot of damage to The Monster in a very short time, especially if you have a Shot Multiplier. Otherwise, be prepared for a long fight, where you must constantly dodge Igor and the fireballs that he throws at you. Don't bother trying to kill Igor as he is completely invulnerable. The key to beating the boss without any items is to whip Igor once to freeze him and then deliver a stream of blows to Frankenstein's Monster. Keep your eye on Igor and immediately attempt to strike him when he unfreezes and then deliver more blows to Frankestein until he's dead.