You've made it to the final stretch. You've survived countless horror, climbed the castle, fallen to its depths, climbed back up again, and even survived a bout with Death. If all of that did not prepare you for what's to come, then nothing will. Stay focused and hang on to your nerves of steel as you approach the ultimate battle.

On this long bridge that leads to the bell tower, and Dracula's chambers beyond, you'll only encounter one enemy: Phantom Bats. Not only has the first guardian returned, there are five of them now. Brave players may attempt to take them on, but smart players will use speed to their advantage. There is an Axe right at the beginning, which is effective against them. The position of each bat is marked by the numbers. 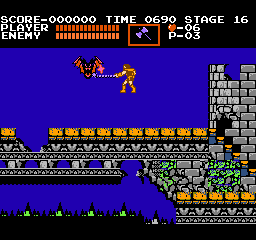 Strike the high bats in mid-air to slow them down

At first, you will only have to deal with Skeletons. Among the gears of the clock tower, you will face a swarm of enemies in the form of Fleamen-transporting Eagles. With plenty of platforms for them to jump on, it gets chaotic very quickly. Dispatch as many as you can, and don't hang around on any one screen long enough to become overwhelmed. If you have the Stop Watch and 10 hearts, simply use the watch as soon as the enemies appear, get to the next screen, and use it again. You should have enough time to get up the stairs before the enemies can move again. 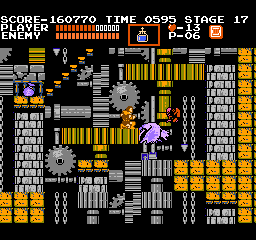 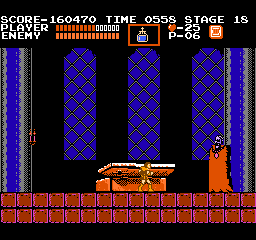 Remain calm as you prepare for the final battle

Beyond the clock tower is the final resting chamber of Count Dracula, who resides over his domain from the highest point in the castle. He has been waiting for you, and he deems you a pesky nuisance to his plans to blanket the world in eternal night. Can you live up to the Belmont family legacy and shut Dracula down for good?

Pick up the Boomerang at the start of this stage if you don't already have one. For the first battle, Dracula does not hang around long enough for any special weapons to be very effective (unless you have the Boomerang with Double Shot or Triple Shot, which will also be very use during the later portion of the battle). Just use your whip and save hearts for the second battle.

Timing is the best weapon against Count Dracula. You can not predict where he will appear next, although it is likely that he will show up right on top of you if you decide not to move. You want to end up exactly a whip distance from him by the time he fully materializes. This way you can jump up and strike his face before he blinks out again. If you jump at just the right time, he will send the three fireballs skyward, which will sail over your head as you are coming down from your jump. If you didn't time it well, you will have to make a decision between hitting Dracula, or stopping the fireballs. Remember, you will only survive three hits throughout this fight; the fourth hit will be fatal. 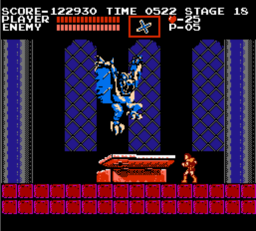 Dracula's second form is significantly stronger than his first

Once you remove 16 bars of health from Dracula, his head will fly off and his body will transform into its true demonic nature. Jump and throw as many Boomerangs or Holy Waters as you can at once, and hope several of them make contact with the demon's head. You are going to have to mix in a few whips to the face, which works substantially faster than special weapons alone. Throw in a whip for every two Boomerangs and you should be able to lock the Demon in place until victory. Maintain a safe distance from the demon and throw your weapons high. Since the demon stands still between shooting blasts of fire at you, you stand a very good chance of hitting him with most of your throws if you time it right.

If you succeed in defeating Dracula's demon form, you will have the opportunity to enjoy the ending of the game. After the cast credits have rolled, the game will begin again from Stage 1, only this time the game will be much harder. All hits, even from this early stage, will cost Simon four bars of health. There is also a new secret or two to discover. Consider yourself the ultimate Vampire Killer if you manage to defeat Dracula twice in one sitting.

Castlevania II: Simon's Quest is the next game in the Castlevania chronology, and is a direct follow up to Simon's adventures in this game.