The enemy threat is at its greatest; you will lose four bars of health for every collision, which mean you can only sustain four hits. Learning how to manipulate your foes in this section is essential. Fierce Axe Knights will await you at key intervals. Red Skeletons will refuse to stay dead after you knock them down and Fleamen roam freely through the halls, making a general nuisance of themselves. Using every trick in the book, you'll survive this area, only to reach the guardian: Death.

There are no difficult jumps to overcome in this hall, but you will be presented with the Red Skeletons. While you can knock them down with a crack from your whip, they won't stay down for long. After a second or two, they rise back up to their feet and resume their slow enchanted pursuit of you. Keep moving. 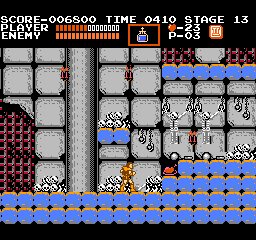 Don't miss the opportunity to collect the Pot Roast

Axe Knights begin appearing in large numbers once you reach this stage. In fact, there are two right at the start. Deal with them patiently, and learn the timing of their axe throws. Remember that they can throw high or low, so whip accordingly. No matter how strong they look, they will never attempt to get too close to you. Use this fact to your advantage and push them off screen when possible. 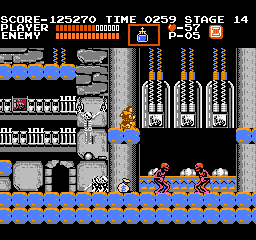 Land on this platform from up above to reveal a bonus

In order to reach the guardian of this leg of the castle, you will have to deal with a series of Bone Towers as you climb the steps to the final hallway. To make matters worse, a series of Axe Knights patrol the floor while small Medusa Heads fly by constantly. It is truly a difficult challenge. 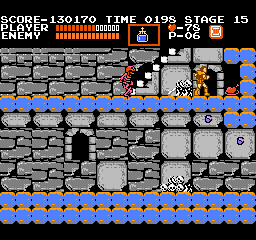 Grab this hidden food before you face the boss

Death is known for his harvests of souls. If you don't want to be added to his collection, attack his wickedly sharp sickles first using your whip. Death himself is rather slow, but he is stronger than anything else you've faced. Using the Axe or Boomerang while jumping between the ledges is one strategy, but throwing Holy Water from the center platform is even better. In fact, if you begin throwing them before he even arrives, and maintain a continuous assault, he may never even have a chance to get into position and summon his sickles. You can destroy him before he ever attacks, but you must be quick!