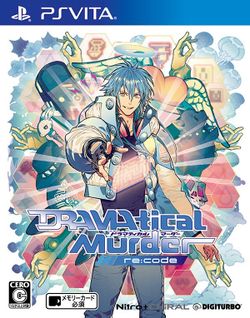 DRAMAtical Murder re:code (ドラマティカル マーダー リコード, Doramatikaru Mādā Rikōdo?) is a remake of the original Windows release of DRAMAtical Murder. Developed by Nitro+CHiRAL and published by Digiturbo for the PlayStation Vita, the original story has been modified in order to fit its rating and appeal to a wider audience; this includes censorship of scenes containing blood or nudity, with new scenes replacing those that have been removed altogether. Aside from these differences in the original routes, the game features an all-new route for Mizuki, adressing plot holes and previously absent angles of the story with two new endings so that it acts as an alternate "true" route.