You begin the stage in front of Count Dracula Duck's castle. You can pogo back across the bridge (as well as above the castle entrance) to find some hidden diamonds, but otherwise, you can proceed into the castle to begin the stage. After a scene, proceed further into the castle to come across the first enemy, the skeleton. This enemy can be dodged relatively easily, as it can oftentimes be seen as a harmless pile of bones, but if you're looking to eliminate it, that can only be done when it has reformed and runs towards the wall. Walk toward the wall that seemingly blocks Scrooge's path for a hidden passage to reveal itself, allowing him to continue further into the castle.

The first chest that can be found in this stage, floating visibly above some stairs, contains an invincibility coin on Easy and Medium, and an ice cream on Hard and Extreme. Save the ice cream in case you take damage, as you will eventually circle back to this area of the castle. Keep going right, up the stairs and outside the castle. Here will be the first encounter with ghosts, dropping into the screen at a high point (if Scrooge has been jumping) or a low point (if Scrooge has been walking). Dodge the ghosts by jumping if you've been walking or ducking if you've been jumping. The chests here only contain diamonds, so feel free to avoid them if you simply want to escape the ghosts. The stairs on the far right of this area lead into a crypt-like area, complete with skeletons and tombs. 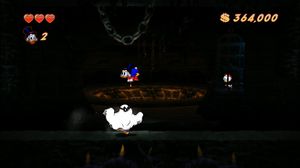 Three of these mini-bosses can be found throughout the castle. They will escalate in difficulty regardless of which you find first.

Swing the cane at the first tomb and a diamond will pop up above it. Swinging Scrooge's cane at the tombs will sometimes lead to rewards such as these, but can also summon ghosts, so proceed with caution. Pogo across the tombs and drop down into the gap at the end of the area. The tomb by the right wall in this lower area can also be swung at for a diamond. Pogo across the thorny vines to the left (a couple of chests here contain health items on Easy and Medium) until you come across Huey in a cage. Simply pogo on the "ghost" as it runs by three times to free the first nephew. Scrooge will also pick up the first part of the ancient rune. Step through the mirror at the end of the path to end up back at the start of the castle.

Keep going right until you find a chain that Scrooge can climb. Take it up to a split in the path; it doesn't matter which way you go first, but the left path is recommended as it is much quicker. Another "ghost" can be found here, this time holding Dewey captive. Again, Scrooge has to pogo onto the enemy's head three times to defeat him, allowing Scrooge to rescue Dewey and collect the second part of the ancient rune. However, this little battle has a twist to it in the form of an actual ghost that wanders around the screen. Dodge the ghost before attacking the Beagle Boy in disguise, as it provides much more of a danger. Once this battle is over, continue to the left for some goodies before returning to the split in the path, going right this time.

Finding Louie and the boss[edit] 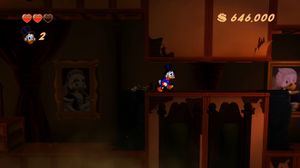 Find this secret passage for a heart container on all difficulties.

Here, Scrooge will encounter the mummy for the first time. He can either pogo onto it or, if he doesn't have space, swing at the ball on its chain as soon as it becomes visible, causing the mummy to unravel. You can also swing at the first tomb for a diamond, and find an ice cream between the next two mummies. Another ice cream can be found after defeating the singular mummy that follows. Keep going right until you reach a wall; here, pogo onto the tomb and a hidden passage in the wall will reveal itself. Inside is a large chest containing one of five Heart Containers on Easy/Medium, and one of two on Hard/Extreme. Afterward, backtrack to the chain, climb it, and enter the mirror to the right. 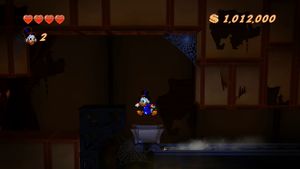 Jump off the cart when the scene changes to avoid dropping down the pit.

Hop into the mine cart to commence the mine cart sequence. Here, Scrooge will have to duck under walls to avoid crashing into them, and make small jumps to collect the diamonds above him. Eventually, you'll have to make a big jump to transfer to another cart, either on a lower path or a higher path; it doesn't matter which, as long as you don't fall down the pit. Once Scrooge enters another screen, the mine cart will drop into a pit and the sequence will end. Make a big jump to avoid the same fate as the cart, and continue to the left to find Louie, held captive by the final mini-boss. Try to land hits on the fake ghost quickly after dodging the two real ghosts, as they will keep coming onto the screen until the fight finishes. Scrooge can then pick up the final piece of the ancient relic, which will give you access to the stage's boss. 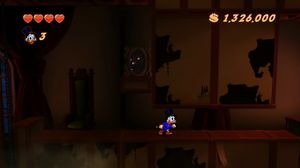 The giant mirror that will take you to the boss can be found past this hidden passage.

Proceed to another mine cart sequence with a similar ending. Upon landing, drop down where you see the chain to encounter Mrs. Beakley on Easy and Medium. Continue past her to the right for some treasure. When you come across another chain, drop down again. Swing at the first suit of armor here for a diamond, and swing at the one under it (to the right) for a cake on Easy and Medium. You can either proceed to the right past the mummies from here or continue to the left until you find a mirror, which will teleport Scrooge past the mummies. Regardless, go as far right as you can, until you come across the mirror that you used to get to the mine cart sequence. Under this mirror is a hidden passage to a giant mirror, which after a scene, can be entered to transport Scrooge to the boss. Before facing the boss, you'll have to dodge some ghosts; don't fret if you lose some health in this tricky area, as the boss itself isn't difficult if you know how to dodge the attacks. 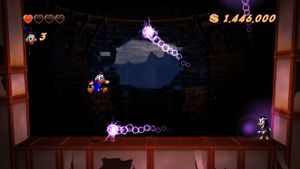 Keep your distance during this attack for an opportunity to jump between Magica's shots.

Superstitious Hocus Pocus
Collect the Coin of the Lost Realm

Magica has two phases of offense. For the first, she'll teleport to the background, where she cannot be hit. Scrooge must dodge lasers that either come from above (by finding a safe spot between them or away from them before they expand) or from the walls (by hopping on crumbling blocks). After dodging this phase successfully, the second phase will begin, in which you can pogo onto Magica before she begins her next round of offense. Her attacks include the following:

After these three attacks, Magica will return to the background, and you'll have to dodge a multitude of lasers until she returns to the foreground. After hitting her twelve times, Magica will be defeated, allowing Scrooge to collect the Coin of the Lost Realm.