Hiyarika is the token cold stage of the game. It is also the first to introduce five sections instead of just three, meaning there are 25 bases to destroy on this stage. This becomes the norm throughout the rest of the game. The standard shop of the game doesn't offer too much in the way of upgrades besides the Jet Engine. You may wish to save your money, however. This round hides not one, but two secrets, and one of them is a shop that can help boost Opa Opa's power tremendously. But first you'll need to find it.

The bases in Hiyarika are called Kachikoron. As expected, they are stronger than bases from the previous stage, but not by much. It takes nine normal sized bombs to clear them away, or five big bombs. You will find them scattered around the stage at various heights. The two extra sections means more bases to destroy, but it also means more $500 bills to collect. Don't let any slip through your fingers. 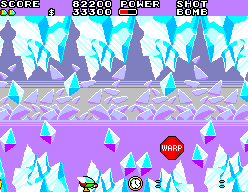 There is a secret item hidden in the game. It's found on the floor immediately to the left of the red warp which leads to the boss battle. It's a clock which can extend the amount of time remaining on a time-limited weapon. This can be particularly valuable if you pick it up just before you head into the boss battle with a particularly useful weapon like the Laser Beam.
Secret shop 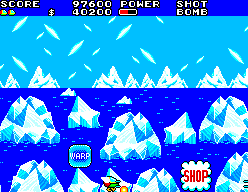 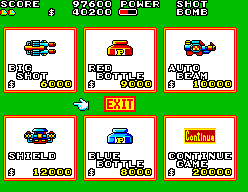 One section has a set of icebergs floating in the water in all but one spot. Shoot that spot to make a secret shop appear. This shop will help boost Opa Opa's power tremendously. First, there is the Red and Blue Bottles which you should purchase in that order, to increase and fill Opa Opa's power meter. Then there is the Auto Beam and Big Shot weapon upgrads which transform Opa Opa into a powerful machine gun. Finding and purchasing these upgrades will cut down on the difficulty of this and later stages. This is also the only shop in the game where you can purchase a Continue. If you're new to the game and still learning how to get past those later stages, the $20,000 asking price may be steep, but worth the extra effort. 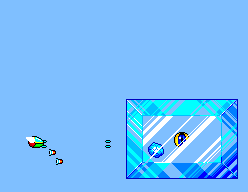 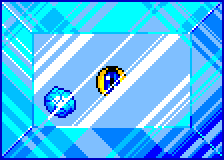 The boss of the third stage is called Iceburn. He is a giant block of ice that moves around the screen in diagonal directions only. Whenever he reaches one edge of the screen, he bounces off of it and continues his diagonal trip around the screen. He occasionally fires off a chunk of ice at you, so it's important to keep moving, not only to avoid the ice, but to avoid Iceburn himself. There's not a lot of strategy in this fight. Simply stay far away from him while you shoot at him as quickly as possible, and reposition yourself when he crosses over from one half of the screen to the other. As you shoot him, the surface of the ice gets progressively cracked until he ultimately shatters. From the ice pours coins and a few dollar bills that you should claim as quickly as possible.