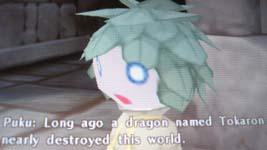 Puku tells you about the dragon Takaron.

Right up from the Nanometer Shrine is a new dungeon named the Meter Corridor. A cutscene in front will show Parin meeting Puku and Puku tells the tale of a Dragon from long ago by the name of Takaron that nearly destroyed the world. The human that helped to destroy it used the same drill that you used! There is no time to ponder, head right in! 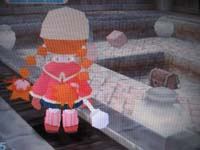 Once through, the first room contains some hollow crates and jars. Blast them for some coins. Proceed forward and you will come to a room with four cute blocks dancing round a chest. They will only attack when you hit them. The chest contains a cookie, you can only hold three at a time, so there's a chance that you cannot carry any more. Smash all the vases and jars and look to the right of the room for a weak wall with two jars beside it. Smash through that to come to a hallway. Spiders (three of them) will appear as you approach the stairs.

There's a mould here to level up your drill and a couple of vases and a hollowed out triangular structure. You should also see a level beyond a fence. Walk round the fence to reach the level and pull it. The gate on the opposite will open and three phantoms will come in. They will not notice you first, so you have time to walk round and spring a surprise on them. When you are done with the room, walk through the new opening to the other room. A phantom with a red mushroom-like cap is in front. When you approach, it quickly flees down the corridor!

Give chase with caution, after the second time he takes off, he will lead you to a trap with four phantom cubes falling from above. At this point, there is also a weak wall containing some coins. When he finally stops near a mould, walking near will attract another two more mushroom-heads and another phantom wearing a shield. Kill them off and you'll see some steps on the right when you came into the room. There is a level up there that will bring you a levitating platform. Don't go on it first, instead, smash the pillars in the room. The one on the left side of the room contains a treasure chest! In it, there's a Mystery Bag!

Now turn around – notice the ladder here? Climb up and you'll see a little narrow strip of walkway. At first glance, you will not see anything special. Here's the secret, jump up and then look to the right (using

) and you will see a chest located on the right side from where you are. Now its time to test your "Targeted Attacks" skill. If you are successful, you should get to the other side where you'll find Power Oil!

When you are done, its time to use the blue platform to reach the other side. Heal your life here (smash the two jars) and proceed forward. The gate closes behind you and you are in a room with four hollowed structures (this is more like a modern-art gallery!). On your left are two pesky spiders and if you look to your right, two phantoms seem to have a heated discussion. Surprise them with a powered attack and once done, you will see that near them is a pile of crates. Smash the bottom-most crate. This will enable you to reach the top of the structure. Slowly go up the stairs (you will need to jump the first bit). Once up, two bats will carry two phantoms to block your progress. It's a narrow pathway, so it's a good idea to quickly charge your drill and attack them before they reach you. Destroy the bats as they circle round. Next up you will see a nice room with a neat water feature. It's a good time to wear your goggles. 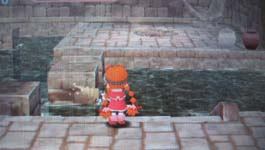 Jump to the opposite side carefully, if you miss you will sustain 2 HP damage. It's a good idea to have upgraded your goggles to level two, where you'll be immune to water. There is stuff to smash and a neat little mould here. At some point, two fish will appear within the water. If you are near, they will jump out and shoot at you.

To clear this dungeon with an S grade, you'll have to kill these two. Wait for them to jump out, then use targeted attacks (jump, target change colour, attack!) to hit them. It's tough if you have to take water damage, so it's entirely up to you. If you move on, you will see a trash can from the second platform – that's where you want to be. Collect the junk and move up front. A little to the right, you'll meet Serial Killer Phantom.

Do not be deceived by his smiling face. He charges at you with his chopper and that can be very devastating. Quickly knock off his weapon and side step his spinning arms move. Use your tornado Drill Skill repeatedly and you should be fine. And that's it, head up front to claim your prize in the next room. It's Poco's Boombox! Now it's time to head back to town.