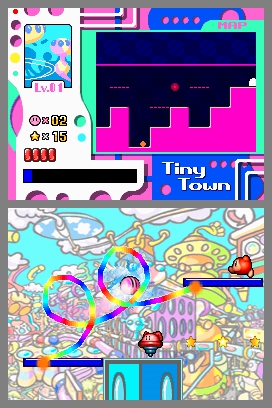 Tiny Town is another linear path from entrance to goal. The areas have few alternate pathways, and those that do, re-converge later. The area, along with other Reddy Land areas, is ripe with point stars, which can get more 1Ups.

The first room holds one of the alternate paths, a tube on the floor and one on the ceiling will lead to the same room. The only difference is whether playing for stars or time. When speed-running, opt for the lower tube. Continue following the only possible route. Keep an eye on the map for the location of the medal. Allow Kirby to fall to the lowest point of the floor near it for an easy medal pick up.

This area later appears as the Line Trial challenge for Tiny Town. Only the final room will need ink usage to get Kirby to the exit door.

The second area is slightly more difficult. The path is mostly linear, with one extra room containing a 1Up. Follow the direct, natural path of the level. The first challenge will be a cannon tour-like puzzle. The Bronto Burts in the way are no threat when the cannons fire Kirby. To collect the most stars, just tap the contact-activated cannon as it spins and aims to where you want to go. After exiting the cannon hot-potatoing bit, travel left and skip the drop points if you need stars or a checkpoint, then drop through the rotating gates.

The medal for the area cannot be obtained until a switch disengaging the large orange block is pressed in Rift Ruin. The medal can be seen after being fired from the cannon through the metal blocks.

All of the rooms are direct paths from one another. The medal for the area can be easily seen on the floor of a room, between two sets of floor spikes. A 1Up can be nabbed in the final room on the opposite end of the exit portal.

This area later appears as the Time Trial challenge for Tiny Town. Learning the short-cuts to the tubes, and grabbing the burning ability will save all the time need for a time under 0:35:00.

Takes place in the third area. To go through it as fast as possible, plan ahead and draw just enough of a Rainbow Line to send Kirby to the door. Dashing is faster while on the ink rails. Get the Burning ability from Burning Leo and use it to blast through straight paths even faster.

Room 1, Kirby will be dropped in the lower left. A single Bouncy can be seen on a ledge near the center of the room. Completely ignore it, and draw a near 45 degree ramp to just below the top-right corner of the room. As soon as Kirby begins rolling on the ramp, tap him to begin dashing, continuously tap him to maintain speed. Kirby will enter the tube and head for the next room. Control of Kirby is lost in each tube interconnecting the tubes.

Room 2, Kirby will drop in through the top-left and the next tube is on the floor of the lower right corner. Use the dash power, and head straight forward. The Waddle Dee is benign, but be prepared to draw a vertical line in case Kirby hits the wall at too high of an angle to fall into the tube.

Room 3, the tube will drop Kirby from the top of the left hand wall. Until hitting a ledge, allow Kirby to fall, and the draw a vertical line. Keep Kirby close to the left-most wall, because the tube to the next room is directly below.

Room 4 drops Kirby onto a small ledge. As soon as possible, empower Kirby's dash move and continue traveling to the left. The tube is slightly higher than the floor; however, dashing should lead directly into the plane of entry.

Room 5, Two possibilities are present here, You can either head directly up to the next tube; or initiate a dash and nab the burning ability from the unsuspecting Burning Leo. The burning ability will ease the burden of constant dashing as it lasts slightly longer and moves slightly faster. Touch Kirby and fire forward towards the left wall, launch from the canon, and then tap Kirby again to fire to the right wall. Draw a line enclosing Kirby and nudging him to roll up to the tube's entrance.

Room 6, the largest and final room, burn or dash to the right-hand wall to be sent upwards in the canon. The landing will place Kirby in another canon. Fire from it and activate the dash or burning move as soon as possible. Kirby will actually shoot past the door below him. Draw an angled line to knock him towards the goal door.

This utilizes the first area. Most of it can be traversed without Rainbow Lines. The final room, consisting of several trampolines is the exception. Allow Kirby to freely bounce through most of it. Near the final bounce, the wall is too high, so timing and a short angled line should be able to get him over that and to the door.