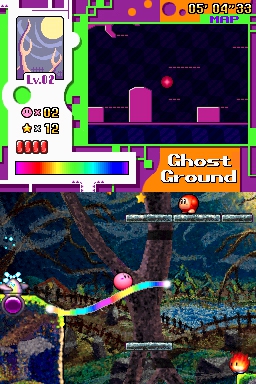 Ghost Grounds aren't any brighter than this.

Ghost Grounds are a collection of dreary areas in Arrange Grove. The areas are simple enough to complete with little guidance, and large enough to accommodate a variety of play styles.

Roll to the canon and prepare to activate the fan. Watch out for the bug that drops near the apex of the wind lift. Draw a rainbow line below Kirby to break free of the air, and send Kirby higher up. Draw the next rainbow line towards the top left of the screen and tap Kirby to perform a dash attack on the Bobo, to acquire the Burning copy ability. Continue going forward, collecting point stars as desired. By constantly tapping Kirby, the burning ability should slay all enemies on contact.

The central shaft, entered from the top, and exits at the bottom, is full of cannons. The cannons will fire Kirby to the next in the sequence, block Kirby before he rolls to the last one, if an energy drink is needed to restore any lost health. The bubbles in the next area serve to raise Kirby to the top of the screen. If more point stars are desired, simply follow the trail leading to the exit door. Above the exit door, an array of blocks that can only be broken with the Burning power house the area's medal. Tap to activate the power and Kirby will destroy the blocks on contact. Drop back down and exit to Area 2.

To get the most out of this area, either avoid the first cannon or block Kirby from reaching the ledge after being shot out. Drop past the Bouncy and head towards a set of ledges enclosing point stars and a Sparky. Attack the Sparky in order to pick up the Spark copy ability. Ascend to the next ledge and cannon, Kirby will be sent to the entry point of the area. The blocks with lightning bolts on them, can now be destroyed by activating the spark ability. Ascend to the ledge after destroying the blocks and reap the point stars.

Follow the resulting paths, aiming to reach the far right, ascend upwards to collect point stars at the end. Escape the enclosed area and travel to the left. The clear blocks will disappear upon contact, leaving Kirby vulnerable to the spikes. Roll past them, without going back. Enter the cannon and the next one to reach an area with a Waddle Doo and several star blocks. Waddle Doo offers the Beam copy ability, use it if the spark ability has been lost, but be prepared to drop it later for another spark ability to access the medal. Follow the path to the left, instead of ascending for more point stars. The paths converge later, so the shortcut can be used if the stars are unwanted. Continue traveling the available path, and notice that the ceiling is no longer visible later. When reaching this point, if still in possession of the spark ability, draw rainbow lines to reach the hidden ledge in the upper right corner of the map. Destroy the spark blocks and follow that path to collect the stage medal and exit.

If not in possession of "spark", simply continue going left to reach the alternate exit door. There is no way to drop through ledges already passed to reobtain the ability. Another playthrough would be needed, if seeking to obtain the medal. 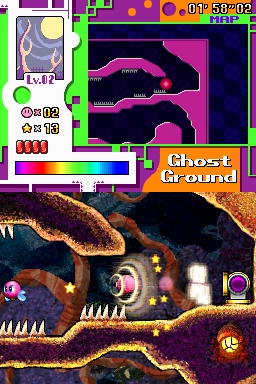 Kirby being fired from the contact-activated cannon.

The first section offers alternate paths, somewhat. If the burning ability is obtained, the metal blocks can be broken with that by dropping through the clear blocks and activating the ability. Otherwise, Kirby can roll forward and use the contact-activated cannon to be shot through it. A small nook with a Waddle Dee and several point stars can be entered or bypassed. The arms in the tunnel descending award point stars as Kirby passes through them. At the checkpoint, an orange action block can be seen, but not passed until activating its corresponding big switch in Rift Ruins. From here, one of two paths (or by backtracking, both) can be taken. The higher one is blocked by star blocks, which can be destroyed using the Beam whip, has an energy drink and many point stars. The obvious path contains an energy drink, some Waddle Dees, and fewer point stars.

Another zigzagging descending tunnel will be taken on the far right. A Bronto Burt is the only enemy in it to worry about. The tunnel exits near an open pit. The lower left area contains an energy drink. The cannons can ease upwards travel, but the Bronto Burts need to be stunned in order to avoid taking damage. At the top, a narrow opening between spikes must be passed. Draw a rainbow line taking Kirby safely through it. Kirby will land on a series of star blocks encasing Bronto Burts. Destroy enough to pass through and stun the enemies below to avoid damage. The painted door will exit the area and begin the bonus Jump Game.

The times for this area again are very lenient. The time trial takes place in the third area of Ghost Grounds. Begin by obtaining the burning ability, immediately activate it, and keep activating it until reaching the wall. Drop to the cannon and fire quickly. Draw Rainbow lines to block Kirby from going into the nook at the right. After dropping through the tunnel, activate burning again and continue using it to reach the next descent. Follow it, and use the cannons to ascend through the shaft. At the star block section, tap blocks as quickly as possible, limit Kirby's movements when needed and go straight for the exit door. Your time should be under 1:00:00, thereby earning all three medals at once. If not play again, and get familiar with the area.

Starts off with 2200 ml of ink, and the top reward is for using less than 1000 ml. This is very lenient for the area. Use the cannon and fan to get high on the screen. Draw a small line sending Kirby to the right and dash to get more distance during the fall. Obtain the burning ability from any of the Bobos. At the next fan, allow it to bring you to the top of the screen again and begin using the burning attack. Stay at the highest portion of the screen to reach the opening for the next area. Allow Kirby to be shot from cannon to cannon. Upon exiting the final cannon, activate the burning power again and head straight for the exit door. Very little ink will have been used, thusly granting all 3 medals again.