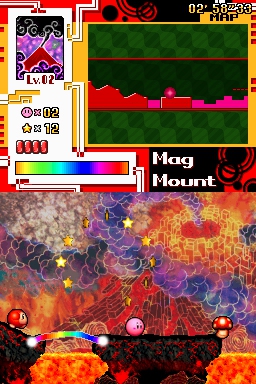 Mag Mount is the third stage of Arrange Gorge, although the stages may be played in any order. The general theme of the area is of an active volcano. The game difficulty increases slightly as Kirby will need to use Rainbow Lines more to avoid touching the magma.

This area is a straight horizontal run from the entrance door to the exit door. As soon as Kirby enters, the area, a Waddle Dee can be seen approaching. The Waddle Dees in this area actually run from Kirby, even though they often fall into the pit of magma. They will respawn when backtracking, and are mostly a problem then. A ring of point stars can be obtained easily, be careful of drawing circular rainbow paths as it speeds Kirby up. The Cappy on the next ledge may take two hits to destroy; the first hit destroys the mushroom cap, and the second destroys the stem.

After being fired from the cannon through revolving arms, a Bobo and Bronto Burt lie in Kirby's path. The Bobo yields the Burning copy ability. Burning can be used to blaze through the area faster. The following sections are again ledges with magma on either side, contain the easily defeated Bronto Burts and Waddle Dees. There are also more rings of point stars available and after the checkpoint an Energy Drink can be acquired.

Follow the ridge upwards until reaching a solid brick wall. The bomb blocks will destroy the wall when tapped with the stylus. The bomb block hovering over the magma destroys the bridge and drops a medal for Medal Swap purchases onto the lava. Very carefully draw a rainbow line to reach the medal and avoid the lava. After destroying the brick wall, magma will appear above as a ceiling and below as a floor. Contact with either should be avoided by drawing sections of lines to guide Kirby to the exit door.

Area 2 employs a more complex layout. The environmental hazard of magma is much more present as well. Several walls, floors, and ceilings are made of the health-taxing substance. The absolute best way to get through this stage is to take things slowly, and continuously limit Kirby's movement by drawing rainbow lines with the intention of blocking Kirby; short vertical "walls" should suffice. Start by allowing Kirby to freely roll towards the edge of the ledge. Draw a small bridge, careful not to send him flying. Kirby should safely roll into the cannon which will launch him to a green pad above. From here simply tap Kirby to hop to the next pad and again to the next cannon. The cannon will fire Kirby to another pad which goes to more cannons. This section is almost automatic, until landing on a green pad with a new feature. Below the pad is a control device with "stop" and "go" options. The symbols resemble buttons on a typical media player (square for stop, arrow for go). Tap the device to go, and stop when getting too close to the Gordo. Jump off by tapping Kirby to reap Point Stars and activate the checkpoint.

The following areas introduce another new hazard, rotating fiery arms. Time your movements and roll past them when the arms can be avoided. The Bobo ahead yields the Burning ability. Obtain the power, and use it to blaze past the line of on-coming Waddle Dees. Another series of cannons will fire Kirby to the next checkpoint pole. Bronto Burt is defeated from this shot, but be prepared to strike the Bouncy nearby. The next section is relatively safe from the fire hazards. Bricks surround the screen keeping the lava away. Upon reaching the end of this section, a bomb block can be used to destroy the bricks and open the section up to the area's medal, a Maxim Tomato, and the lava. Use rainbow lines to carefully guide Kirby around to obtain the rewards and avoid the hazards. Head back up to the where the bomb block was and continue traveling left to reach the door to the next area.

Evidently, lava ebbs and flows as a water tide would. This area pressures you to get moving before being engulfed in magma. The natural uneven surface and ebbing lava work together to form a hectic area. Most of the travel is horizontal, zig-zagging the map, but Kirby is pressured to constantly seek higher ground.

Begin by quickly launching into the cannon. Follow the ridges leftward, while dashing and the Waddle Dee should be defeated along the way. Enter the next cannon, draw a line to get to the highest ledge and activate the dash attack to obtain Burning from the Bobo. The burning ability is extremely helpful in this area. Use the burning power and go through the entire length of this tunnel section. Get to the higher ledge and employ burning again to mow down the flock of spear throwing Waddle Dees. Continue doing so until reaching the next cannon, as expected, enter it and be fired upwards.

After another checkpoint, a lone Waddle Dee can be seen approaching. Don't dash into that one, on the other side is a rotating fire arm, time your movements and dash safely past it and the Bobo. Pass one more fiery arm and Waddle Dee, then use the trampoline to ascend again. The next chamber is the last for this area. The lava rises and falls faster in this chamber. The medal for the area can be found in a niche in the right-hand wall. Reach the painted door quickly. The door leads to a Jump Game for bonus stars and a choice of Boss Fights.

This challenge takes place in the first area of Mag Mount. The awarding completion times range from 24 to 37 seconds. Despite the simplicity of this stage, the times can be tricky to achieve. Getting touched by the fire or using any of the stage devices slow Kirby down, as they stun him for a second. Every second counts so avoid everything possible, even the burning ability. Draw a rainbow line slightly over halfway up the screen and continuously employ the dash move. This area can be beat faster with the Meta Knight ball, once unlocked from Medal Swap. But a successful run with the Kirby ball is achievable even for new players.

This challenge takes place in Area 3. The amount of ink allotted may seem daunting on the first few runs. But is sufficient for the moderate amount of ink usage needed to reach the top of the final chamber. The burning ability is helpful unti reaching that last room. Once entering it, drop the burning copy ability. The ramps needed to send Kirby higher up, while dashing can be somewhat longer than expected, but moderately so. Avoid drawing lines with the sole intention of changing Kirby's direction of travel whenever possible; line trial requires frugal management of ink usage and health may need to be sacrificed often.