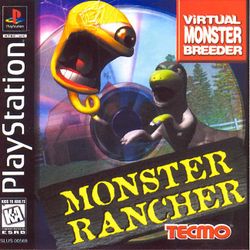 Monster Rancher (モンスターファーム, Monsutā Fāmu?, Monster Farm in Japan) is a console game released in North America on November 30, 1997 for the Sony PlayStation system. It is the first game in Tecmo's Monster Rancher series, featuring the raising, fighting, and breeding of monsters.

Although it is possible to acquire a monster in-game, the series is known for the ability to acquire new monsters using Compact Discs (CDs). Players can use any readable CD, and the game creates a monster using the data stored on it. Certain CDs would result in unique monsters: for example, some Christmas music albums will give the player a monster of type "Santa". Once the player has two or more monsters in reserve, they can be combined, creating a new monster with traits of both "parents". Once the player has a monster, it can then be raised to be a fighting machine. The primary way to advance through the game is through monster fighting tournaments.