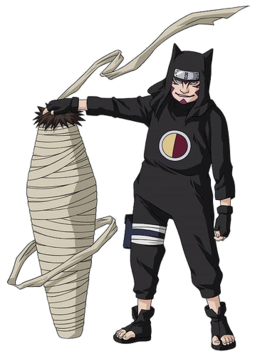 Kankuro is the second oldest of the three siblings (Gaara being the youngest and Temari being the oldest). For the first half of the series, he is frequently at odds with Gaara, though he tends to hold his tongue for fear of being killed. In Part II, once Gaara begins to reveal his dreams and motivations to Kankuro, Kankuro becomes very protective of Gaara; he lashes out at anyone who speaks poorly of Gaara and when Gaara is kidnapped, he readily risks his life to save him. Kankuro is a talented puppeteer, and has thus far been shown to have three puppets in his arsenal: Karasu (Crow), Kuroari, and Sanshōuo. Crow is used for offensive purposes, Black Ant traps opponents in its body to make them easier targets, and Salamander protects Kankuro and his allies from enemy attacks. The puppets are all destroyed by their original creator, Sasori, in Part II. Kankuro is later seen using Sasori's body as his new puppet.