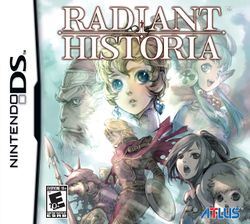 Radiant Historia is an RPG developed by Atlus for the Nintendo DS. It was released in Japan on November 3, 2010 and in North America on February 22, 2011. An expanded remake called Radiant Historia: Perfect Chronology was made for the Nintendo 3DS. It features new character designs, voice acting, a new character named Nemesia, and additional scenarios.

The continent of Vainqueur... A world of decay where everything is swallowed by the sand. A strange phenomenon is spreading from the site of an empire that met its downfall centuries ago. As the desertification approaches from the west, a fierce war rages over what fertile land is left. To the east is Alistel, facing the grave threat of the western nation's aggression. It is here... That an intelligence agent of Alistel is about to undertake a mission of critical import. The most skilled agent of Special Intelligence, he is clad in red and rides in the darkness... His name is Stocke.