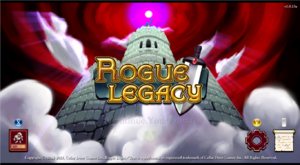 Unlike other roguelikes, Rogue Legacy allows players to build off of their previous character. Players take control of a knight. Upon dying, that character is lost and a new "heir" must be chosen. The game then gives a few different characters to choose from. Each character has randomized traits to give the feel of a genetically different child. Traits change a player's size, environment, stats, and ability (e.g. magic or a ranged weapon). In addition, any money acquired will be available for the heir to spend on the "manor" (a tree of upgrades), which is used to give permanent upgrades to future heirs.

For more details on the story, see Rogue Legacy/Walkthrough.

The game takes places in a medieval fantasy setting. The entire game takes place on the outskirts of and inside of a randomized castle. The story revolves around the lineage of one noble family. You are the heir to the throne. Your goal is to take it back, or die and let your child try.