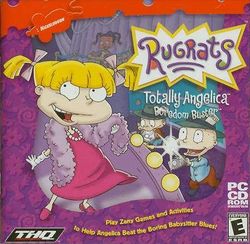 Rugrats: Totally Angelica Boredom Buster is a party game which was developed by KnowWonder for The Learning Company and released for Microsoft Windows on July 1, 2000; as the name implies, it is the tenth title for the Rugrats series, and the last that does not feature Kimi (Chuckie's stepsister).

What's worse than spending the evening with a bunch of dumb babies? Having a boring babysitter
who wants to yak on the phone all night! Hold on to your pigtails because Angelica has a few ideas
on how you can beat the babysitter blues. You'll have so much fun, you'll want the babysitter to come back more often!
Fit for a Princess:
Complete Angelica's "Fantasy
Face" by matching the
look in the mirror.
Angelica TV:
Lights, Camera, Angelica! Create your
own music video starring you-know-who
using hip-hop, ballet, pop or disco music.
Ice Queen:
Help Angelica beat the clock with a
full-on ice folly, but beware of those
pesky barrels and banana peels!
Makeover Time:
Create a high-fashion photo
shoot for Angelica! Choose
color-customizable outfits
from her closet and add
them to her photo album!
© Viacom International Inc. 2000