This is the first game in the Rugrats series. For other games in the series see the Rugrats category. 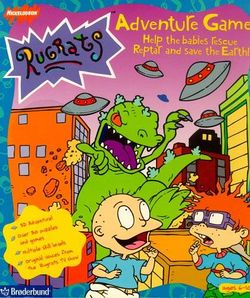 Rugrats Adventure Game is an adventure game, that was released by Brøderbund Software for the Microsoft Windows operating system in 1998. It is based upon the Nickelodeon animated series (or "Nicktoon") Rugrats, which was produced by Klasky-Csupo, Inc., who had previously produced the first three seasons for Twentieth Century Fox's The Simpsons, and another Nicktoon, Aaahh!!! Real Monsters.

It's the first software
game that lets you join an
adventure with the Rugrats
gang! The evil Queen
Angeleeka is out to destroy
the earth - and Reptar,
the babies' only hope, could
become a light snack for
Hubert the Trash Monster.
So it's up to you to save
the day in a real Rugrats
adventure!
© Viacom 1997