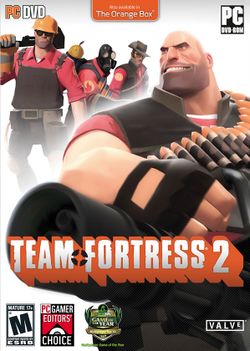 Team Fortress 2 is the sequel to the Team Fortress mod for Quake. It was first announced by Valve Corporation in 1998, but has metamorphosed many times since then, and the final product was released in 2007 as a multiplayer FPS. Originally, the game was imagined as a more realistic and militaristic rendition of the original Team Fortress, but the design changed, and Team Fortress 2 was released as a cartoon-styled and non-realistic game, with visuals based off the art of J. C. Leyendecker.

The game is based around nine classes, any of which the player can choose to play as. Each class has its strengths and weaknesses, and for a team to win effectively, players of different classes have to cooperate. At launch, there were only three gametypes: control point, territorial control, and capture the flag. Since then, three more gamemodes, Payload, Arena and King of the Hill, have been released. Valve's new statistics system – closely tied with the Steam Community – is also a near-integral part of the game, with features such as domination and revenge depending entirely on it.