The Quest of Ki

The Quest of Ki | Table of Contents | Gameplay | Walkthrough 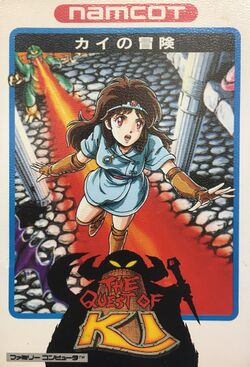 The Quest of Ki (カイの冒険, Kai no Bōken?) is an action game developed by Game Studio and published by Namco for the Famicom in 1988. It is the third game in series which started with the 1984 arcade game, The Tower of Druaga.

The game is a side-scrolling platformer with one hundred levels. In each level, the player's goal is to pick up a key and open the door leading to the next area. Various enemies, including slimes, ghosts, and wizards, appear on each floor, and any contact with them results in death. Ki has no weapons, and thus can not damage or defeat any of the enemies. Her only abilities are to dash and jump. As long as the player holds the jump button down, Ki can rise indefinitely into the air. However, contact with the ceiling will cause her to drop to the ground and become stunned for several seconds.

Many of the levels consist of puzzles in which the player must carefully regulate the height and direction of Ki's jumps. Each stage in the game contains one or more treasure chest, which hold various items. Although many of the items bestow helpful abilities, the effects only last for the floor on which they were found. After completing the game, players can gain access to forty bonus stages. These stages contain cameos from some of Namco's other popular franchises, such as a ghost from Pac-Man, and the enemies from Dig Dug.

The designer of the game, Masanobu Endoh, has stated in interviews that the concept of the game was directly inspired by Atari's 1983 arcade game, Major Havoc. The game's internal project name was "Minor Havoc" and was not originally conceived as part of the Druaga story line. The idea to use Ki as the main character was added later as a way to tie the concept to a popular franchise. The game was never released outside of Japan, but it an enhanced version of the game was published for Japanese mobile phone systems in 2008.

The story of The Quest of Ki is actually a prequel to the original Tower of Druaga. It occurs shortly after the demon Druaga has stolen the Blue Crystal Rod and taken it to his tower. The goddess Ishtar sends the priestess Ki to the tower in order to retrieve it. The game then follows her doomed quest to the top of the tower, and leads directly into the story of the original game.