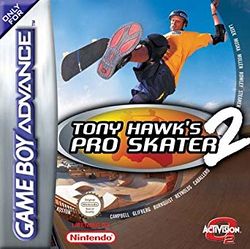 Tony Hawk's Pro Skater 2 is a skateboarding arcade-style game, the second in the Tony Hawk series of sports games. The Game Boy Advance version was published by Activision and developed by Vicarious Visions. The port was released several months after the initial PlayStation version in 2001.

Emulating the console version, this port has levels in a fixed isometric view with the skater rendered as a 3D model. Despite having fewer levels and missing the Create Skater and Park Editor modes, the game is a faithful recreation of the original. The career mode is still the same: skate in a massive tour to complete goals within a time limit and prove your worth in the skating scene. There's also a free skate mode to explore the levels and a two-player mode to compete against other players.