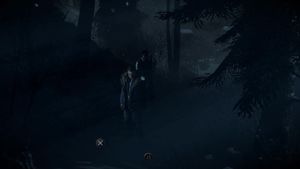 Head back toward the camera opposite the mansion to find this first totem.

The chapter opens with a conversation between Josh and Chris. Josh's relationship with Chris will increase if you decide to show concern for him rather than gossip. After their conversation, Chris will encounter Ashley; choose to be confident to increase your relationship with her. Once that's done, before continuing around the side of the house to look for a way in, head back towards the camera. This will take you to another screen, where you have the option of speaking to Matt (choose to be friendly to increase your relationship with him) and Sam (no change in relationship). Right by Matt is the first totem of the chapter, Guidance Totem #2. You can now walk back to the mansion, taking a turn to the right to find an alternate exit. 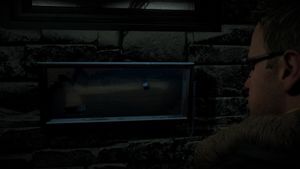 On the side of the lodge is a clue in the form of an empty axe holder.

Along the path, Josh will stop walking after bringing up Ashley, at which point you can press

for a chance to greatly increase your relationship with him by choosing to agree with him both times. Once you reach the side of the lodge, examine the empty emergency axe case for Mystery Man Clue #4. To the right of it is a storage bin that you can push with Josh's help.

Once inside, use the lighter to find some collectibles. Loss Totem #1 can be found directly in front of you. Make a left and turn back to find another room. Enter to find a newspaper clipping on a shelf, and turn it around for Mystery Man Clue #2. 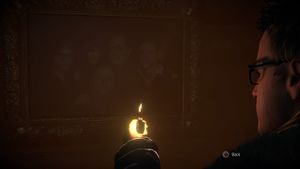 After exiting the garage, this portrait can be found at the end of the hall.

Return to the larger room, then exit through the door to the right. At a turn in the hall is a family portrait on the wall, which you can examine for Twins Clue #4. After another turn, open the door to enter a room that leads into the mansion's main hall, though don't ascend the stairs to the bathroom just yet. Across the room is Twins Clue #3, a prom photo on a short surface. From here, walk left into another room (past some locked doors) to find an answering machine. Interact with it to get it to play an interesting message, which also happens to be Mystery Man Clue #3. You can now head upstairs for one more collectible before going to the bathroom.

Once upstairs, turn left. Down at the end of the path, past a doorway and obscured from view is Twins Clue #1, a film trophy. You can now finally progress the story by making your way to the bathroom. Head through the wide doorway you passed by earlier and down the short hall, then through the sole open door. Open another door at the end of another short path to find the bathroom. Open the cabinet by the tub to find deodorant, which Chris will then take down to the front door.

Whose Side Are You On?
If Matt decides to side with Emily in the fight between her and Jessica, she will be kinder to him later on.

It doesn't take long for things to get heated once the group gets indoors. If Matt saw Emily flirting with Mike in the previous chapter, he can now initiate a fight with Mike. Doing so will get Matt some affection from Emily and some distance from Mike. Make your choice to be directed into the next butterfly effect, which will be triggered automatically if Matt didn't see Mike and Emily together before.

Emily and Jessica get into a catfight, and it now falls on Matt to either back up his girlfriend or defuse the situation. The former will get Matt some points in his relationship with Emily, while the latter will upset her. While this decision isn't a very important one to make, it will affect how Emily treats Matt later on.

Follow Jess down the stairs. When she stops walking, talk to her for a short scene in which the pair take a picture. If you manage to get both characters in the frame, Jess will commend you on the good photo, though it doesn't affect their relationship either way. Continue to follow her down the path for another opportunity to talk to her, this time about Emily. As always, agree with her to improve your relationship with her. Once you reach the gate, take the path to the right to find Danger Totem #1 and the generator. Turn it on, then unlock the gate and continue to follow Jess along the path. She'll stop for a third time when she sees some police tape, at which point you can speak to her about Hannah and Beth. Choose to be respectful to improve your relationship with her.

After some more walking, the pair comes across the mines. Choose to be heroic and follow Jessica for some affection, as Mike will end up following her down either way. After moving the cart, follow the tracks, but be on your guard as a cart will roll toward Mike. Press

Turn back and take the path to the left. After a minor scare, you should see a table off to the right. Examine the map on top of it for 1952 Clue #1. Head straight until you're out, then take the left path at the fork to find Loss Totem #2. Follow Jess up the stairs and you'll eventually find yourself on a cliff, triggering a short scene. Open the gate to the left and head down some stairs. After being startled by a bird, choose to be witty to gain some more affection from Jessica.

A bit more trekking and you'll get a scene. The perspective will then switch to Sam back at the lodge as she attempts to get her bath going. 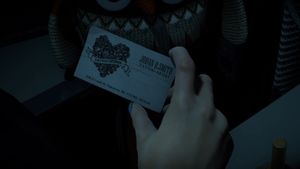 The first of the clues in Hannah's room is a tattoo card.

After exiting the bathroom, head into a doorway to the right. Sam should now find herself in Hannah's room, unchanged from the moment she disappeared. On a table to the right is a tattoo card; turn it over for Twins Clue #5. On the nightstand by her bed to the left is a postcard which you can also turn over for Mystery Man Clue #8. Finally, in the walk-in closet on the other end of the room, pick up a scrap of paper on the floor and turn it over for Twins Clue #6. Among some other items you can investigate for a peek into Hannah's life are the music box on her desk and a picture of Mike hiding beneath a party invitation on her corkboard, though you don't obtain any clues from them. 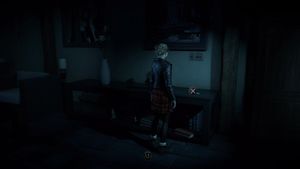 The beach photo can be found in the basement after a short discussion with Josh about Chris and Ashley.

Once all clues are collected, you can finally proceed down the stairs to meet back up with everyone. After the scene, follow Josh down the stairs. He'll take a flashlight out of a drawer; above it is a picture that you can pick up and turn over for Twins Clue #2, which also happens to be the last clue of this chapter. But first, speak to Josh about Chris and Ashley. If you choose to be mocking, Josh's relationship with Sam will take a hit. After picking up the final clue, follow Josh through the door to the left. Josh will stop to talk to Sam again; either choice is fine this time.

Pick up the baseball bat while Josh examines the water heater. Sam may need it later.

After heading down the stairs, Josh will check out the water heater, at which point you can examine a baseball bat by the camera to his right. Choose to be serious after picking it up to improve your relationship with him. While it doesn't seem important right now, as long as you pick up the baseball bat, Sam will remember it later at a point where she may need it. After a particularly long "don't move" session in which Sam must hold the flashlight steady for Josh, she must now aid him in actually starting up the heat. Hold

again when the light comes on. High five Josh afterward with

, a precursor to the following QTE. You can choose to protest or prank him back, it doesn't matter; the friends will start to hear some strange noises afterward. Choose to be heroic to impress Josh and earn some points with him, and after a short bit of walking, the QTE will begin.

to slow down the assailant with a mattress and

to attempt to get the basement door open. On that note, you'll get another session with Dr. Hill, and the chapter will end.