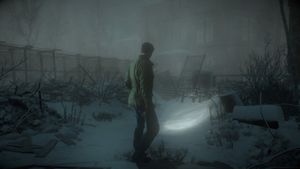 A door to the left of the chapel leads to a graveyard, the first clue of the chapter.

Dawn is fast approaching, but Mike resolves to get the key to the cable car from Josh before then, so you now find yourself back in the sanitarium. Walk down the hall and up the stairs to find yourself in a familiar room. Exit and follow the path back to the chapel. As soon as you enter, cross over to the left side of the room. Open the door here and enter the new area to come across a short path to the outside. Before heading outside, look to the left to find Danger Totem #4 lying on the floor among some debris. Now head outside and examine the graves for 1952 Clue #23. Return to the chapel and this time, head to the other end of the room, by the now blocked-off entrance. Near here is a staircase; take it up and walk along the balcony until you come across a hole in the floor. Drop down to find yourself in one of the chapel's gated side rooms. Pick up the torch and shotgun on the table, then exit and head back toward the left side of the room. Interact with the door in the center and shoot the lock off to move on. It is here that Mike reunites with the wolf, but only if you gained favor with it in the fifth chapter. 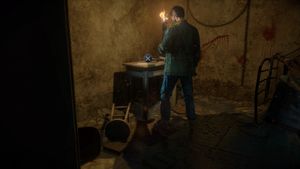 This clue can be found in a cell to the left after descending a long staircase.

Follow the path outdoors and then back inside, into a new area of the sanitarium. The following path is pretty straightforward; just pull the lever and shimmy through the cracked-open cell, then head down the stairs into the depths of the building. Make a left turn into a cell to find a medical report on the table. Pick it up and turn it over for 1952 Clue #24. Continue down the path to the right to trigger a short scene, then follow the wolf back to the outer area. You should see a Wendigo crawl up the wall as you walk, but there's nothing you can do about it for now. Just keep walking through a hole in the wall. In the next room, you should see a sign labeled "B-Wing." Ignore it for now and turn the opposite way, toward the camera. This is very important, as the final 1952 clues are located down this hallway.

Start by entering the first door to the right (Mike's left). Here you'll find a projector that you can activate for 1952 Clue #25. Exit the room after viewing the movie and continue walking toward the camera. At the very end of the hall is a large room. Enter to find a desk by the door; open the drawer and pick up the file, then flip through it for 1952 Clue #27. Now interact with the wooden wall at the back of the room with light seeping through the slats to bust through. Shoot the lock to the cell off and approach the decaying corpse. Interact with it to grab the folder off its lap and obtain the final clue, 1952 Clue #26. 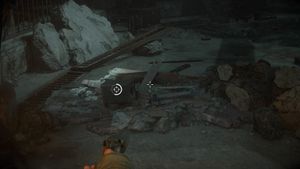 Wait this target out; shoot all targets that follow.

Return to the path and head down the opposite way, away from the camera. You should eventually find yourself back at the "B-Wing" sign. Proceed past the sign to progress the story. After some more walking, be prepared for a QTE sequence: 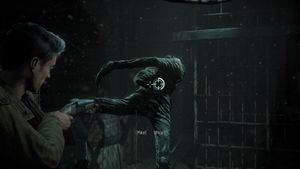 This chapter is very QTE-heavy. Prepare to shoot plenty of Wendigos.

Once that's over, Mike will walk down a hallway lined with cells. Shoot the Wendigo that lunges at him when he's about to turn a corner. Another hall lined with cells follows; press

to dodge a hand and

to dodge another, then shoot. Press

to dodge, and then again, shoot. Dodge with

and shoot one last time to finally be done with this sequence.

Another QTE sequence follows, this one shorter. Shoot the Wendigo that chases Mike and the wolf down the hall, then press

to knock a barrel over. Kick the barrel toward the Wendigos with

, then shoot it to take out both.

Lock the door and proceed up a set of stairs. Follow the sole path through the demolished building and you will eventually encounter yet another Wendigo. Shoot the lock off the door, then choose to barricade it. This will protect both Mike and the wolf. A scene follows in which Mike and the wolf part ways, but if you've made it this far with the wolf, you'll earn yourself a gold trophy as consolation.

Attempt to shove through the door with

to trigger the final action sequence. Ignore the barrels and choose to shoot the Wendigos both times. Mike's segment will conclude here. If you managed to perform the chase for Jessica successfully way back in the fourth chapter, a short scene showing you that Jess is still alive will play before the perspective switches back to the mansion group.

Left Behind
This decision only determines who you play as, so choose whichever choice you're most comfortable with.

If Chris is still alive, the chapter will begin with a butterfly effect decision: will you leave Chris behind to catch up on his own or push him along? If you choose to leave him behind, you'll be playing as Chris. If you choose to reassure him, you'll continue playing as Ashley. Make whichever decision you want; keep in mind that while this guide will continue as Ashley, all choices and collectibles the two characters see are the same. 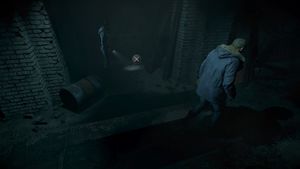 This totem is located along the path, in a nook off to the side.

Walk down the dark path, keeping left; you should eventually come across a nook to the left which holds Danger Totem #5. Continue to follow the group down the hall to eventually come to a dead end, or is it? Examine the manhole cover in the center of the area, then pry it open for an alternate route down into the sewers. Being the last down, Ashley's left with the responsibility of lifting the manhole cover back into place, and the group moves on without her. Walk down the path in an attempt to catch up, and you will eventually be presented with an important choice: investigate the mysterious voice or ignore it and rejoin the group. Follow these instructions carefully in order to collect a missable totem and avoid death:

The group then comes across a high wall that Sam is determined to scale, and the perspective switches for the last time in this chapter. 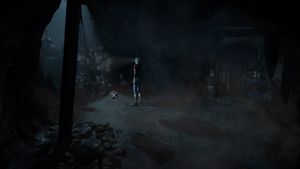 After scaling the wall, take the path to the right, then forward, to find this final totem.

This final segment of the chapter opens with a QTE in which you are presented with some choices. For the quickest path, choose to leap (

to avoid slipping off the rickety bridge. Sam will then approach a lead pipe that you can pick up. Drop down and pull open the door up ahead to make it outside.

Once in the snow, follow the path straight, along the outer walls of the sanitarium and then back around into the woods. Sam will finally reach a gate leading into the sanitarium after crossing a bridge. Push the gate open and make your way to the interior of the building. Aim and smack a Wendigo with the pipe a couple of times to save Mike and conclude the chapter.