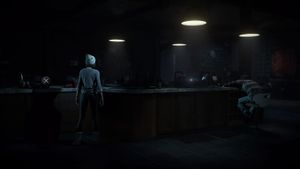 Pick up the note on the counter for some context.

While this prologue is crucial in setting up the game's story, gameplay-wise it acts as a tutorial. As such, none of your choices here actually matter, but there is one collectible to pick up. Once you gain control of Beth, investigate the note on the counter with

for a clue as to Hannah's whereabouts. On the other side of the counter, pick up the bottle of beer by Josh and examine it as prompted. 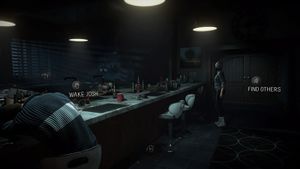 Feel free to choose either option for the prologue's choices, as the outcome is the same.

After the scene, you are prompted with your first choice: find the others or wake Josh. Regardless of your choice, the outcome is exactly the same. After another scene, you are introduced to another key element of the game: QTEs. Performing all QTEs successfully is essential for the best ending, so make sure to get your practice in (and if you do happen to trip up, you can always pause the game and close the application from the PlayStation menu, then restart the game to resume at your last saved point). For now, just avoid the branch with

before being presented with another choice: fast or safe. Again, it doesn't matter which you choose. After a couple more inconsequential choices, Beth will turn to her smartphone for some light. Slide a finger across the

touch pad to unlock it, and move the light around with the 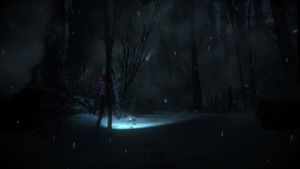 Find the totem at the end of the path with Beth's flashlight.

Continue down the path. Eventually, a deer will come galloping out of the brush in front of you. A short walk past this is your first Totem, a Death Totem. Just as with other items, approach it with

to pick it up, and turn it around with

for a scene. These Totems reveal a potential death of the character that comes across them, so consider them a warning. Continue the trek forward (press

to speed up) to resume the search for Hannah. Beth will slow down when she sees some mysterious fire protruding from the trees, but ignore it and continue forward to find your sister. After the scene, you're presented with another choice. Though this one is a bit tougher than the others, it again has no effect on the story. The following tragedy concludes the prologue, and kicks off the main story.