Take the quickest path to save Jessica.

The chapter opens with a long QTE sequence that doubles as a butterfly effect. Jessica has been dragged off by someone - or something - and Mike must be quick if he wants to save her. This entails taking the quickest path at every opportunity and hitting every button successfully. Below is a list of all correct choices, as well as the button combinations to clear them: 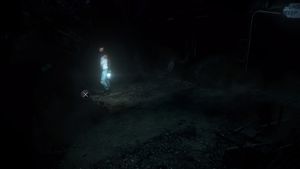 This Guidance Totem is at the base of the stairs.

That's all for the chase, so you can pick up the lantern and take your time for the rest of the chapter. After the scene, head down the stairs. As soon as you've descended, you should see Guidance Totem #4 to the left. Pick it up before continuing on your way, past the "unsafe/keep out" sign. Jess is only a short walk away, scraped up but moving or dead based on your actions. Attempt to reach for her to trigger a scene, after which Mike will attempt to shoot a figure up above. Shoot him or not, it doesn't matter. Mike will proceed to chase after the figure (press

to jump over the gap), after which you are given some choices:

None of these choices matter, so choose whichever you prefer. For the final jump, press

to slide under the door after Mike tosses the gun aside, and all QTEs in the chapter will be cleared. Light the torch to conclude Mike's segment of the chapter. 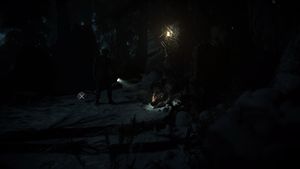 Take a left at the fork to find a clue and a totem.

This segment of the chapter is much more relaxed, so take your time picking up some collectibles. First, shortly after exiting the mansion, you should come across a fork. Take a left to find Death Totem #4 and Mystery Man Clue #15, a severed pig's head. Return and take a right to the barn, but before entering, head around the side to find Loss Totem #3.

...And Which One Will Die?
Choose which friend to save by moving the lever. Saving Ashley is recommended here.

Now that the collectibles are out of the way, head inside for the second butterfly effect of the chapter. Move the lever to one side or the other in order to save one of Chris' friends. In this case, it is recommended that you choose to save Ashley, as choosing to save Josh will actually lead to the same result.

After a scene, you end up in another session with Dr. Hill. As always, this doesn't have any real effect on the story, so answer as you wish.