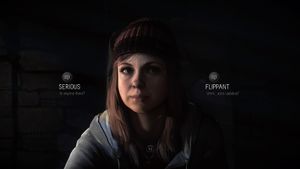 You can decide how you want to direct the seance, though it doesn't have any real impact on the story.

The chapter begins with Chris, Josh, and Ashley in the midst of an attempt to communicate with some spirits. Naturally, the responsibility of actually speaking to the spirits falls on Ashley. You can take this seriously or choose to make a joke out of it; this only affects Ashley's personality traits and relationships in minor ways, so if you don't care to see how, disregard the next paragraph.

You can begin the seance by either being serious or flippant. While being flippant will upset Josh, Chris appreciates the joke enough that your relationship with him will improve. Use the next two choices to obtain some information about the mysterious encounter; it doesn't matter which, as you'll receive the same information in the end. For the following choice, you're given the option to probe or be apologetic. You can improve your relationships with both Chris and Josh by being apologetic. The next choice again has no consequences, as the same answer will be given regardless of the question. It is then that the seance ends, and the story transitions back to Mike.

Follow the path forward to begin the search for Jessica. Once you reach the truck, head left. At the end of this path is Danger Totem #2. Back at the truck, head right. After a scene, you'll have to decide how to react. Choosing to be witty, just as with the bird, is the best choice for Mike's relationship with Jessica. After another scene, look for Guidance Totem #3 to the left of the bridge before crossing it. 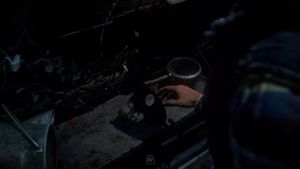 The old mask found in the shed is a clue, but Mike can also choose to scare Jess with it.

Continue down the path and the pair will stop when they hear a sound. Choose to throw a rock or wait it out; the result is the same. Further along the path is a shed. Inside is 1952 Clue #2, an old gas mask. After picking it up, you can choose to either show it to Jess or get back at her by scaring her with it. Be warned, though; scaring her will upset her enough for her relationship with Mike to take a hit. After some more walking, the pair encounters a deer. Approach it and choose to comfort it or put it out of its misery; it doesn't matter which. A QTE sequence will then start, capped off with a butterfly effect.

Be Her Hero
Choose to save Jess first and she'll be more open with Mike in the cabin.

to jump over a gap, then choose to risk the shortcut (

to open the gate) to get to the cabin. Jess falls, leading into a tough decision: will you grab the key to open the door in time or put Jess first? There is actually no danger here, so choose whichever path you prefer. Keep in mind that while choosing to assist Jess first will please her over the alternative, if your relationship with her is already maxed (as it should be if you were witty after she scared you, chose not to scare her back, and sided with her over Emily), this will do you no good, and may actually negatively impact your relationship.

Once you've entered the cabin, Jess will request a romantic setting, but first pick up a couple of collectibles. Mystery Man Clue #7 can be found inside the book to the left of the fireplace; flip a page to receive it. On the wall nearby is a gun, which Mike can use to scare Jess or simply show her; as always, the former will negatively influence their relationship, though in this case, the latter will cause a slight drop in their relationship as well. Behind the couch are some matches that you can pick up to get the fire going, but before heading to the fireplace, go out into the hall. At the end of it is a picture of Hannah that you can pick up and turn over for Twins Clue #7. Return to the fireplace. At some point, Jess will complain to Mike about having lost her phone, but there's nothing you can do about it now.

Back at the fireplace, turn on the lantern, then pack the fireplace itself with lumber and light a match to finally start a conversation with Jessica. Choose to reassure her at every opportunity in order to boost your relationship and get her to open up. After the scene, head through the hall to the back room and pick up the phone. Another scene will follow, and then it's back to the mansion.

Before following Chris down the stairs, turn back around; to the right is a glasses case which you can pick up for Twins Clue #9. Now you can continue by heading down the stairs. To the left of a room is a floor vent that you can examine for Mystery Man Clue #10; just head left as soon as you enter instead of following Chris. After these two clues are collected, simply follow Chris until you can push a button for a scene, after which you are given control of him.

Head inside the secret passageway to find a photo that you can pick up for Twins Clue #8, and turn over for Mystery Man Clue #9. After speaking with Ashley, head into the previous room and through the door that seems to open on its own. Head left before opening the door at the end of the hall to find a note. Pick it up and turn it over for Mystery Man Clue #11. You can now open the door and continue into the mansion's main room for a scene.