Yogi Bear and Friends in: The Greed Monster

From StrategyWiki, the video game walkthrough and strategy guide wiki
Jump to navigation Jump to search
Yogi Bear and Friends in: The Greed Monster | Table of Contents | Gameplay | Walkthrough 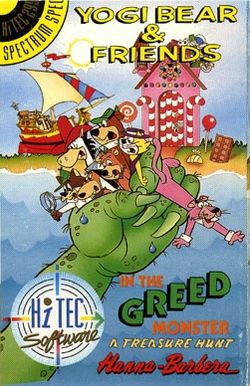 This is from the back of the cassette's, or disk's in the case of the Atari 8-bit and Commodore Amiga (which is 16- and not 8-bit) versions, inlay card, the front of which is shown in the image to the right:

Yogi's Treasure Hunters receive a call from Top Cat saying "All the
toys in the world have been stolen". It's their job to find out what
has happened to them.
They set out to solve the mystery, but while doing so all but Yogi
are captured by the Greed Monster.
Yogi not only has to find and collect all the missing toys, but now
has to rescue all his friends.
In the course of Yogi's travels he will come across some objects,
these are as follows:
Keys
Bubble Gum
Cans of Pop
Jars of Sweets
Jars of Honey
Toys
Money
© Hanna-Barbera Productions Inc. 1990