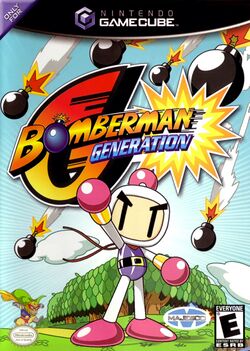 Bomberman Generation is the 22nd game of the popular Bomberman series and the series' first entry for the Nintendo GameCube. The game employs the system's rendering capabilities to employ a cel-shading technique to the game's 3-D graphics. In addition to providing a single-player adventure, the game respects its roots by also including a multiplayer battle game in the traditional Bomberman style.

In this installment, six powerful "Bomb Elements" have been found by scientists, but the ship carrying them was attacked and the Elements lost on the planet Tentacalls. Bomberman is called in to recover the powerful Bomb Elements, but his quest will be dangerous. Not only will the inhabitants of the planet resist, but Mujoe and the Hige Hige Bandits, thought to be behind the attack, and are now seeking the Bomb Elements themselves, and they've enlisted help: a team of bomb specialists known as the Crush Bombers. Fortunately, Bomberman will be able to assemble new types of Attribute Bombs as well as enlist the help of creatures called Charaboms to enhance his bombing abilities.