Before you go charging into Anemos Sanctum, make sure your character levels are 45+, the monsters inside are freakishly strong along with the boss. In order to get into the actual inner sanctum, you need all the 72 djinni along with the psyenergy Teleport. Once you arrive in Contigo, do not head towards the sanctum directly instead use Teleport on the circle in the middle of town. Once you've done that, you'll arrive in the 'true' entrance of the Anemos Sanctum. Ahead the door is sealed and can only be opened if you possess all 72 djinni, look around the room and you'll see some circular tiles with elements depicted on them. Stand on the big tiles and the djinni will light up every smaller tile. Once all the tiles in a certain area is lit, the torches above the door will ignite. Once all four torches are ignited, the door opens. 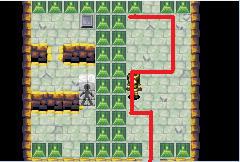 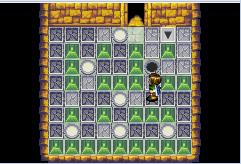 The Crack Puzzle in Anemos Sanctum

In the first room, you'll see an unguarded combo tablet which will offer Charon, the second strongest summon in the game! Move ahead behind where the tablet used to be and you'll head downstairs into the sanctum.

On a side note, this can be the best place to farm Orihalcon because Sky Dragons drop these. If you wish to get the best equipment right now, go ahead and farm Orihalcon. otherwise, proceed.

Take the left passage that leads upwards and then when you enter the next room, head left again and enter the new room. Here you'll come across a mimic stone that 'mimics' your movements except that it moves left when you move right and vice versa. This mimic puzzle shouldn't be too problematic. If the mimic stone falls into the abyss, you can simply exit and reenter the room to start again.

From here, head right and push the stone pillar so that a shortcut is accessible, head upwards from here. In the next room, ignore the path upstairs instead head right and down through a doorway.Here you'll see some round tiles and an arrow tile. Step on all the round tiles until it is all white, once this is done, the arrow tile will shine and you may step on the tile to ascend to the upper floors.

Exit the room and you'll enter another passage with another one of those stone pillars blocking a shortcut. Unblock it and take the downward passage. Follow it and a downstairs passage is revealed. Keep following the passage until you see another downstairs doorway on the right, you may enter the room and obtain a Dark Matter from the chest before you exit this room. Follow the previous passage, turn right and head downwards and another puzzle is revealed.

Here, you'll see some the room is filled with cracked tiles and the white tiles you've seen before. There is only one path you can go to reach all the tiles along with the arrow tiles. If you fall from the cracked tiles, you'll end up in the room with the Dark Matter chest again. This honestly shouldn't be too difficult, if you can't solve it then use the screenshot above as your guide. Once you've ascended up to the next floor, follow the passage again and head downstairs. You'll re-enter the same room you were in before the puzzle. Open the shortcut by moving the pillar on the left and head right and up through the doorway.

In this room is another puzzle. Your goal here is to push the pillar onto the switch to hold the door open. however the boulder in the room complicates matters. Use lift on the boulder and head downwards. Progress through this room until you reach the second mimic puzzle. This is more complicated than the first one so bear with me. Move up as of normally until you cannot move any further due to the obstacles. Let the mimic stone stand in front of the block and move downwards one space with Felix. Doing this restrains the mimic from following you and now your mimic stone is slightly ahead of you in position. Now move up through the obstacle gap and set the mimic on the switch to open the door. You'll re-enter the boulder room after the puzzle. Here, use move on the pillar towards the right into the holes. Now exit this room via the mimic room and re-enter it. Use lift on the boulder again and take the upper passage. Follow through this room and you'll re-enter the same map again. Now this time head downward to the pillar island and move the second pillar across to the right. Exit and re-enter the room again and lift the boulder once again and head towards the pillar island via the downward path. Move the pillar and cross the island and finally the pillar can be moved towards the switch!

Warning: There is a glitch where you can run into the pillar whilst it's on the switch. Once you did that, you'll be standing on top of the pillar and will be stuck there! The only way down is to restart your game so do not try it!

Enter through the new doorway and follow the passage, ignore the upper route along the way so keep heading left. Once again, another annoying Mimic Puzzle is in your way, this time with more obstacles. Dodge all the obstacles normally until you positioned your mimic stone in front of a square obstacle. Move up one space until you'll be ahead of the mimic stone by one tile. Now position the mimic stone behind the same obstacle and move one space downwards so that the mimic stone is on the same position as you. Move through as you normally would and move the stone onto the switch. Enter through the newly opened door. Here, you may head downstairs and obtain an Orihalcon from the chest. Exit this room and head right through the doorway.

This is a fairly big room that is a semipuzzle. Ahead of you is a broken tile island, head left on the island but make sure you steer clear of the tiles towards the upper and the right path! If you happen to fall from the cracked tiles, you'll fall into the room with the Orihalcon chest. Follow the passage upwards and rightwards. Ignore the downward intersection for now and keep following right. There would be more square obstacles along with a move pillar that is reachable. Push it out of the way and go back to the intersection to head downwards. Once you reach the cracked tile island, head rightwards. Use 'Sand' on the sand path and push the pillar out of the way. Follow the passage upwards and rightwards and open up a shortcut by moving the pillar into the gap.

You're nearly there, just hang on. Up ahead, you'll come across another simple puzzle which when completed, it resembles one of those hover birds from Jupiter Lighthouse. Once you're done, save now! The boss battle is going to be soon! Prepare your djinni and use hover on the bird platform to reach Dullahan.

This is the hardest boss in the game, far stronger than Doom Dragon. As you can see from his skills, Djinni Storm can put all your partys djinni into recovery mode! Some of his less threatening yet familiar abilities such as Curse, Condemn, Bind and Break can prove to be troublesome. True Collide can also make your life miserable as your whole partys HP is drained giving Dullahan more HP. Elemental Swap allows Dullahan to do... actually, nothing. It doesn't have any effect on anything, but he normally uses this before using Summon Charon, so it's a good warning sign at least. Formina Sage is one of Dullahan's strongest moves that can deal up to 1000 damage on a single target and can often 1HKO weaker characters like Jenna, Ivan, Sheba or Mia. Last but not least, his most dangerous move Summon 'Charon' is similar to the normal djinni summon except it's directed to you. Even worse, it has a chance of KOing your characters (better than your own Charon summon, actually). Did we mention he regains 200 HP at the end of each round?

There are two ways in finishing off this boss. You can either Summon Rush on him or go gun-ho at him. Most people prefer the summon rush. If you plan to tank this boss down, it is recommended that all of your attacking party is over 50+. This method takes a while but it works. Have Felix or Isaac using the Sol Blade with high luck to improve the chance of the unleash Megiddo. Also bring a multi-target healer like Mia or Jenna with over 1000 HP. It is recommended that you also bring water of life with you on all your attacking party. If you do not have water of life, either have a character with the psynergy 'revive' or a character with a djinni that can revive for them. Have your other two characters with the djinni Granite, Flash or Shade and use barrier every now and then, have one of the characters equip the djinni Lull. Once you're set, have Felix or Isaac use the Sol Blade to continually damage him. Megiddo can deal over 1k damage to Dullahan so he wouldn't have a chance to heal to full HP. Meanwhile, let your multi healer do her job and your two secondary characters use the 'barrier' djinn to prevent damage. The other character should use Lull every two rounds to prevent Dullahan from attacking every round. Alternatively, you can let one of your secondary characters to attack but keep the character with Lull to prevent Dullahan using attacks every two rounds.

A Summon Rush is a better option killing the boss much quicker at almost any level. However if you do not know what you're doing or if the summon rush fails, you're literally screwed. Have Ivan and Sheba in the front along with Jenna and Felix. Before you fight, make sure your characters has the following:

Once you're ready, begin fighting Dullahan. On the first round:

From the two rounds, you should be able to hit more than 16000 damage unless your partys attack power is weak.

After you kick Dullahan out of the way, your reward is the strongest summon in the game, Iris!