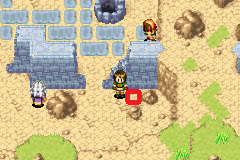 In Loho, go right to where the cannon and the dwarves crowding around it are. Use your Magma Ball on the cannon (don't worry, you won't have to go and get another one) to blow a hole in the wall. Once you're done, the dwarves will carry the cannon to your boat, and attach it for you. But whilst you're doing that, head on through to the area you made accessible. Assign Scoop to the Psynergy Shortcut Burst occupies at the moment, and dig up the Golem Core in the ground using Scoop. Use Lift on the boulder and use Scoop to get another Golem Core. The image shown indicates with red squares where other random items can be dug up. None of them are good; just a bunch of coins, Smoke Bombs and Sleep Bombs. You can check the area near the crack in the wall for a Herb and an Antidote if you want.

Climb up the vine at the top and go around. Hop across to the roof of the Sanctum, where the Jupiter Djinni Lull will join without a fight. Go back down. The crack in the wall to the bottom right of town has nothing except about 100 coins to dig up. However, the bigger space to the bottom left, that is already being mined by the dwarves, contains something much better. The image shows where to dig - the red square is where some Mythril Silver, the last new type of forgeable material, lies. The red squares are a Herb and a Game Ticket from left to right.

When you've got what you want, you can use the Inn/all-purpose shop (it really IS all-purpose) and the Sanctum if necessary. Once you're done, leave town and the dwarves will reappear, having fixed the cannon to your ship. Don't get back on though - head northeast along the path. It will go north to a cavern, which you should enter.

Go down the long set of stairs to the bottom. The Carry puzzle in here isn't too difficult - Carry the block in front of you into the groove, then move it so it's in the middle. Go around and climb up the ladder. Move the block along, then drop it down a level using Carry. Go back down and Carry it on to the top of the other one. Go back up the ladder and hop across. Examine the tablet to get Haures! Haures requires 3 Venus and 2 Mars Djinn on standby, plus it has a chance to inflict Venom on your opponents. Not Poison, Venom (this does about 80 damage a turn compared to the 20 or so Poison does - you may have been unlucky enough to have suffered it at some point).

If absolutely necessary you can return to Loho to heal up. Now, get back on your boat and sail directly north to a snow-covered island - get off and enter the settlement.

Coming here and talking to (Mind Reading as well) the people can prove how a little exploration can lead to a random discovery that gives you vital clues on what to do next. For example, Kalt Island has a couple that tells you where to get Magma Balls, and the cannon that fires them, as well as why you need them to get to Prox.

Now, you need to make a choice - you can either go back to Yallam and forge your materials, or you can proceed north straightaway to the Northern Reaches. It's probably best to go back to Yallam, so you can get some new equipment and stand a bit of a better chance at Mars Lighthouse when you get there. If you decide to press on to the Northern Reaches now there's no point in sailing all the way back once you've completed the first half or so of Mars Lighthouse, as you will soon find out.

If you do go back to Yallam, you should have a Dragon Skin, some Mythril Silver, 2 Salamander Tails and 3 Golem Cores. It is highly recommended that you get the Levatine from the Mythril Silver, since it's a powerful weapon (it'll do well even if you did get an Excalibur from the Orihalcon you got at Atteka Inlet - if you did then equip it on Piers, Issac or Garet instead). Do whatever you want with the other stuff, although make sure you get stuff you can use (try not to get duplicates unless you want them, and it's probably best to stick with armour rather than weaponry).

When you're tooled up, leave Yallam and fly back across the land shortcut by Mikasalla that you used to get here, and go back to Loho if you need the Inn or Sanctum. Head through the foggy gap in the rocky spires at the furthest north of the Western Sea to enter the Northern Reaches.