Golden Sun: The Lost Age has a grand total of 29 summons - 16 ordinary and 13 new ones learned through Combo Tablets.

Venus is gained automatically when you get your first Venus Djinni, Echo. When summoned in battle, a series of yellow geysers erupt from underneath your foes. At the start this is useful, but it becomes weak very quickly.

Ramses: Guardian of an immortal pharaoh[edit]

Ramses is roughly twice the power of Venus. It's a weird rocky monster that slams a load of rocks down on your foes before punching them with an exploding fist. Again, as with Venus, when you get it, it's useful, but it grows weak quickly. You get this when you get your second Venus Djinni.

Cybele: The great mother of the earth[edit]

Cybele is the level 3 Venus summon, and a bit more powerful than Ramses. A frog like monster with trees spit seeds on the ground attacking the enemy with throny vines. Once again, this grows weak quickly. You get this with your third Venus Djinni.

Judgement is the level 4 Venus summon, and very powerful. When you obtain your fourth Venus Djinni, you can begin summoning this. It's about twice the power of Cybele and looks cool - a huge figure fires a huge energy blast on the earth causing a giant blue explosion covering the whole of Weyard.

Mars is got when you obtain your first Mars Djinni, Cannon. This summon is basically a small fiery explosion centered on your enemies.

Kirin is available when you get your second Mars Djinni. A beast coated in flame rushes across the screen and enemies are damaged in a 'flare storm' style. It's roughly twice the power of Mars.

Tiamat: The queen of all dragons[edit]

Tiamat is more powerful than Kirin, a dragon appears breathing fire on enemies. It's still quite weak though.

Meteor: A meteorite from deep space[edit]

A bit of a cop-out here, since Meteor is not some form of mythical beast. No, it's a giant fiery rock about to smash your foes to burning pieces. It's very powerful. Like the other level 4 summons, this requires four Mars Djinni to first obtain and use, and will remain very useful throughout.

Jupiter is obtained with your first Jupiter Djinni, Breath. This is basically a load of windy shockwaves pummeling your foes. Like other level 1 summons, it becomes weak quickly (although later on in the game, the opportunity will arise where level 1 summons will be doing 400 or so damage!).

Atalanta becomes available with your second Jupiter Djinni. A floating lady will appear before summoning a load of green spears/arrows to strike your foes. Quite good when you get it, but again, becomes weak.

Procne: A goddess in bird form[edit]

Procne is the level 3 Jupiter summon. It's basically a giant twister, with a bird firing energy blasts at the foes caught inside.

Thor: The mighty god of thunder[edit]

This is more like it. The level 4 Jupiter summon is available with your fourth Jupiter Djinni and it's very powerful. Enemies are blitzed by a bolt of energy before being zapped to death by a stream of lightning from Thor's hammer. This does about twice the damage of Procne.

Mercury is the final level 1 summon, and available when you find your first Mercury Djinni, Fog. This is basically a load of horizontal water jets blasting your foes.

Nereid is the level 2 Mercury summon, and basically a girl with a fan riding on the back of a turtle. Don't underestimate her, because your foes then drown underneath a torrent of water.

Neptune: An incarnation of the sea king[edit]

Neptune is quite powerful, with a giant whale firing gigantic water jets at your foes.

Boreas: The god of the north wind[edit]

Just because this guy is the world's biggest Slush Puppie machine, does not mean he is weak. The level 4 Mercury summon will crush your foes underneath a gigantic build-up of ice before smashing them apart. It does roughly twice the damage of Neptune, and comes with your fourth Mercury Djinni.

You find Zagan in Indra Cavern after learning Lash. He requires 1 Venus and 1 Mars Djinn on standby to summon. Zagan causes Earth and Fire damage by slamming a flaming axe upon his foes, and may decrease enemy Defense. It's marginally more powerful than a level 1 ordinary summon (Venus, Mars, Jupiter or Mercury).

Megaera: The goddess of vengeance[edit]

You can find Megaera in Osenia Caverns after learning Scoop. Megaera requires 1 Mars and 1 Jupiter Djinni on standby to summon. She attacks by striking two swords on the ground and spins in a furious whirlwind before appearing again to increase all the front-row characters' Attack.

You can find Flora in Air's Rock after solving a small puzzle when the whirlwind statues are active. She requires 1 Venus and 2 Jupiter Djinn to summon. Flora does a little more damage than a level 2 summon, and has the added possibility of putting your foes to sleep.

You can find Moloch in Madra Catacombs after learning Reveal, Tremor, and Frost. Moloch requires 1 Jupiter and 2 Mercury Djinn on standby to summon. He attacks by breathing ice upon his foes which may also lower the enemies Agility.

You can find Ulysses in Izumo, after defeating the Serpent, completing Gaia Rock, and learning Sand. Enter Izumo Catacombs by moving the pillar to complete the Reveal symbol. Ulysses requires 2 Mars and 2 Mercury Djinn on standby to summon. Ulysses summon claws to reap his enemies damaging them and may also prevent your opponents from moving for a turn.

Eclipse: A dragon whose wings span the skies[edit]

The combo tablet for Eclipse is available at the fountain in Lemuria - it's the prize you get when your first Lucky Medal lands in the centre. Eclipse requires 3 Jupiter and 2 Mercury Djinn on standby to summon. Eclipses attacks by firing a huge beam from the skies and causing a huge explosion in the world map similar to the manner of judgement. He may also lower enemy attack.

Coatlicue: A goddess bearing the water of life[edit]

You can find Coatlicue in SW Atteka Cave - which can only be accessed once you have your ship's wings. Coatlicue requires 3 Mercury and 3 Jupiter Djinn to summon. Coatlicue does not inflict damage - she'll heal your party for a small amount. This may seem useless, but for a few turns your characters will regenerate about half of their maximum health at the end of every turn.

Haures is the last of the easy combo summons to get. The tablet is in Angara Cavern (northeast of Loho on the west coast of Angara) after you join Isaac and co. and get the Carry Psynergy. Haures requires 3 Venus and 2 Mars Djinn on standby to summon. What makes Harues so good though, is that he may inflict Venom on foes by slashing at his enemies.

You can find Daedalus in Yampi Desert Cave, after learning Teleport and Sand. Check the top of the sand waterfalls you can now go up to find a cave entrance. To get it, you need to beat the extra boss Valukar. Daedalus requires 3 Venus and 4 Mars Djinn on standby to summon. Daedalus summons several smaller missiles and a larger missile. His missiles may seem weak to begin with, but a turn later an enormous missile hits, doing more damage.

Catastrophe: The embodiment of destruction[edit] 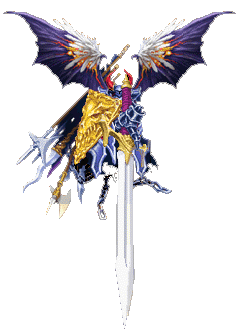 Catastrophe is in the Sea of Time Islet after trading for the Li'l Turtle and learning Teleport. Inside the cave, you need to beat the Sentinel. Catastrophe requires 3 Mars and 5 Jupiter Djinn on standby to summon. Catastrophes attack is somewhat similar to Judgement only that the graphics look cooler. It also has the added effect of getting rid of some of your foes' PP.

Azul: An awakened dragon from the deep[edit]

You can find Azul on Treasure Isle, after learning Grind and Lift. You need to beat the extra boss Star Magician in order to obtain it. Azul requires 3 Venus and 4 Mercury Djinn on standby to summon. Azul drowns his enemies and summons an aqueuos exploion damaging and may also cause an enemy to be afflicted with Stun.

Charon: The ferryman of the River Styx[edit]

Charon is pretty much free, available in Anemos Sanctum after learning Teleport and getting all 72 Djinn from Golden Sun and Golden Sun: The Lost Age. Charon is at the beginning of the Anemos Sanctum dungeon. Charon requires 8 Venus and 2 Jupiter Djinn on standby to summon. Charon summons a huge void in which enemies are absorbed into it before the void explodes further damaging them. Although Charon does a lot of damage, the extra effect of instant death only has a 1% or 2% chance of actually working. Otherwise, it's a great and powerful summon.

Iris is the final combo summon. She's in Anemos Sanctum, available after learning Teleport and getting all 72 Djinn from Golden Sun and Golden Sun: The Lost Age. At the end of the tough dungeon, you have to contend with Dullahan, the hardest boss in both of the Golden Sun games and arguably one of the hardest bosses in any RPG. Iris requires 9 Mars and 4 Mercury Djinn on standby to summon. Iris summons a rainbow that lifts opponents into the air and sends them into the sun, this does heavy damage roughly equal to three times the power of a level 4 summon, and fully restores and revives all characters, both front and back.