You are the pilot of the Vic Viper, the most technologically advanced interstellar space craft and weapon that the citizens of planet Gradius have ever developed. Once again, they need its power to rescue them from the greatest threat they've ever know. You must fly the Vic Viper through invading alien territory in an effort to defeat their leader and drive them away from your home. The Vic Viper is extremely maneuverable and powerful, but it does not start out this way. The Vic Viper can tap into energy deposits left behind by destroyed enemies (the power-up capsules) to drive weapon enhancement technology. When the Vic Viper is launched, it's starts the mission out at the slowest speed with only the most basic weaponry. You must collect the power-up capsules and strategically tap into the weapon enhancements in order to build upon the destructive power of the Vic Viper and steadily increase your offensive abilities. 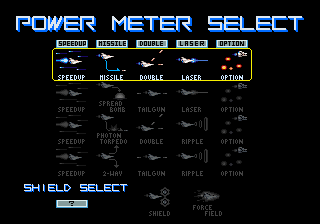 In the beginning of the game, you must choose from among four different power-up arrangements that you will rely on throughout the game. While each arrangement contains Speed Up and Options, the Missiles, Double, and Laser weapons that they offer can vary. Choose the arrangement that is best suited for your play style.

In addition to one of these arrangements, you are also given the opportunity to select which style of protection you prefer: Shields or Force Fields. Explanations of all of the power-ups available to your craft are found below.

Speed Up naturally increases the speed at which you may maneuver your ship across the screen. The more Speed Ups you apply to the Vic Viper, the faster it can fly around obstacles and enemies, or line up with oncoming enemy crafts. The Speed Up power-up can be selected five times before it depletes. However, you should not apply this power-up to its maximum ability. Doing so will cause a condition known as "over control," which occurs when the ship moves too quickly for you to make meaningful adjustments to its position in space. Every player has a speed at which they are most comfortable guiding the ship through obstacles. Do not select a faster speed than you are comfortable handling. 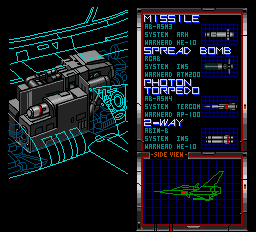 There are more Missile options than any other weapon in the game. They are the only power-up that is unique in each of the four different power meter arrangements. After you activate a missile power-up, the Vic Viper (and every Option that you have) will fire the type of missile you have selected. Only one set of missiles can exist on the screen at one time. The next set of missiles will not be fired off until all of the previous missiles have dispersed.

Missile
These missiles are the same as the missiles used in the original Gradius game. After they are launched, they continue to drop down until they fall off the bottom of the screen, or until they land on the surface of some terrain. They will continue to coast along the terrain as long as the terrain is flat or slopes downhill. They will explode if they come into contact with an enemy, doing enough damage to destroy most basic enemies.

Spread Bomb
Unlike the regular Missiles, Spread Bombs begin falling in a parabolic motion to the bottom of the screen as soon as they are launched. Once they hit an enemy or the terrain, they cause a massive explosion which lingers briefly, and is capable of destroying many enemies that fly into it. They do not glide forward along the surface like regular Missiles do, so you are exchanging range for power.

Photon Torpedo
When Photon Torpedoes are launched, they fall straight down to the ground with no forward motions (apart from the scrolling of the screen). When they reach the ground, they immediately begin to glide forward along the ground just as regular Missiles do. When a Photon Torpedo strikes a basic enemy, the enemy is destroyed and the torpedo continues moving along the ground. These missiles are capable of destroying several basic enemies in one shot, but are not useful against bigger targets.

2-Way Missiles
Like the missiles available from Salamander, two missiles are launched from the Vic Viper in a parabolic motion, one up and one down. These missiles are the only kind to offer protection from enemies above the Vic Viper as well as below. However, they do not glide along the ground when they hit the terrain, nor do they have any special offensive capabilities, so they are very basic in behavior. 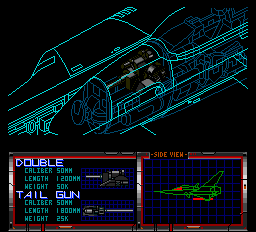 There are two choices of Double cannons to choose from, one for each type of Laser available. Note that selecting Double replaces the Laser power-up, and causes Laser to reappear in the Power-Up bar; you cannot have both power-ups active at one time.

Double
Ordinarily, the Vic Viper can fire off two shots on the screen at one time. If you activate the double shot power-up, one of the shots will be directed up to the ceiling at a 45° angle and fire simultaneously with a regular shot. This effectively increases the range of your gun while at the same time decreasing the efficiency of your fire straight ahead. Both bullets must disappear before the Vic Viper (or any Option) is capable of firing a double-shot again.

Tailgun
Like the Double weapon, the Tailgun permits the Vic Viper to fire off two bullets simultaneously. Unlike the Double weapon, the second bullet of the Tailgun is fired directly behind the Vic Viper, allowing you to strike targets that are behind you just as easily are targets that are in front of you. When this weapon is combined with the 2-Way Missiles offered in the Type 4 power meter, the player is effectively capable of firing in four directions at one time. 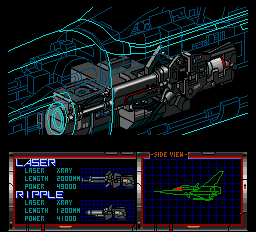 There are two different types of Lasers to choose from. Once again, selecting Laser replaces the Double power-up, and causes Double to reappear in the Power-Up bar; you cannot have both power-ups active at one time.

Laser
When you activate the laser beam power-up, the regular shots of the Vic Viper will be replaced with a long powerful laser beam. The beam can extend to the full length of the screen simply by holding the fire button down. The beam will travel up and down with the height of its originator, even after the beam terminates and flies forward on its own. The beam will strike any enemy that it hits, usually destroying any basic enemy that it comes in contact with. Note that the Type 2 Laser has the slightly thicker red Cyclone Laser appearance from Salamander compared to the thinner blue Laser of Type 1.

Ripple
Originally seen as a replacement to Double in Salamander, the Ripple is an alternate laser weapon which fires a circular beam. This beam starts out small, but continuously expands as it travels farther to the right side of the screen until it reaches its maximum size. While it doesn't have to persistent penetrating power of the Laser, it allows you to hit enemies without requiring a great deal of aim or precision. Between the third and fourth arrangements, the only difference is cosmetic; Type 3 features blue Ripple beams while Type 4 offers red beams.

When you activate an option power-up, a small orange ball begins to follow behind your ship. This ball, known as an Option, contains every bit of fire power that the Vic Viper ever has. If the Vic Viper powers up, so do any of the Options. Options are primarily used to increase your offensive power, but they can also be used to safely destroy objects in positions that the Vic Viper cannot proceed to. The Options typically follow your ship in a snake like way, trailing behind in the ship's previous positions. Small adjustments to the ship's position causes the options to similarly adjust themselves. You can activate up to a maximum of four Options. However, the enemies attack you with a firepower that is proportional to your perceived threat. Therefore, the more Options you have activated, the more aggressively the enemies will attack you. 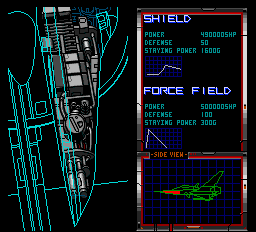 Once again, the final power-up on the bar is simply labeled "?" but it should come as no surprise since you are given the choice between two different types of protection at the start of the game.

Shield
When activated, the two shields flies on to the screen, one from the top and one from the bottom. The eventually settle to the position right in front of the Vic Viper. They can absorb 16 enemy bullets and collision. Each time they absorb damage, they get a little smaller. Eventually, they will disappear entirely, indicating that the benefits of the shield have ended. Note that the shield only effectively blocks attack from the front of the ship. The Vic Viper is still vulnerable to attacks focused on the rear of the ship.

Force Field
This is an alternate form of protection, first seen in Salamander, which wraps the Vic Viper in a protective energy cloak. Unlike the Shields, the Force Field protects the entirety of the ship, not just the front. The trade off for this, however, is that the Force Field takes fewer hits before it dissolves, three bullets or two enemy collisions. As a result, you lose the Force Field much sooner than you would lose a Shield, so you may have to reactivate it more frequently as well.

Choosing which power-ups to take, and in what order, is an essential part of the strategy when playing Gradius II. Choosing the best selection depends on your playing style and the stage that you are about to encounter.