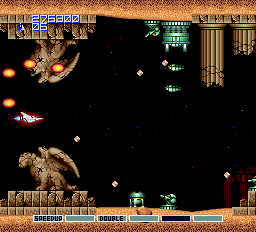 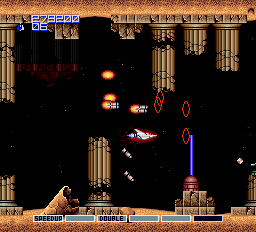 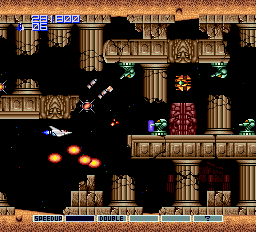 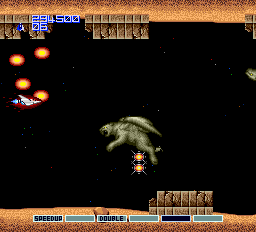 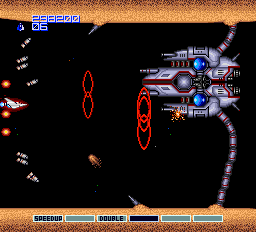 The Desert Core approaches you from the left side of the screen, but don't wait too long on the right side for it to arrive. Once it crosses half of the screen, it launches two tentacles into the sand above and below it. These tentacles curl around and the tips pop up out of the sand. These tips will be shooting at you as you attack the ship, in addition to the array of four lasers along the front of the ship. There are two cores protected by barriers which you must wear away in order to access the cores and destroy them. Once you destroy a core, the tentacle on that side of the ship goes away. Once you destroy both cores, the ship enters a second phase. It rearranges itself to resemble a more traditional Big Core, with a single core in the middle. In this phase, it shoots two long lasers straight ahead, while launching heat seeker missiles at you from the back. These missiles cannot be destroy, but are easily avoided by moving out of their way. Concentrate your fire at the middle of the ship to destroy the barriers in front of the core, and then destroy the core itself to defeat the ship and advance to the next stage.