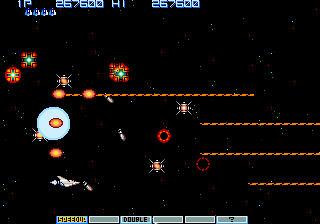 Note: If you have four Options with you, it is still possible for the Option Hunter to show up on the left side of the screen and attempt to steal a few of the Options away from you, so be on alert.' 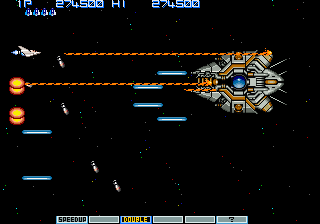 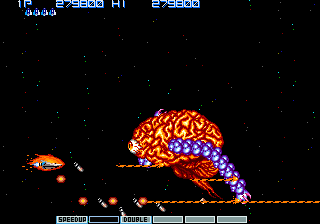 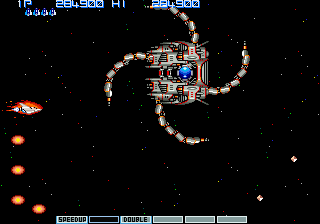 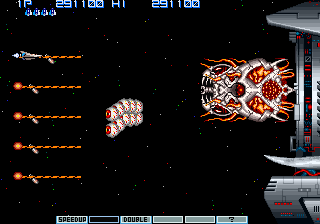 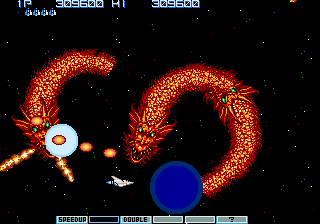 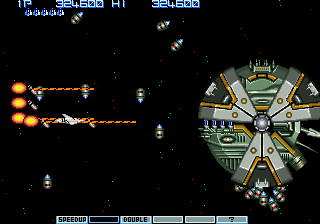 The final boss that you face is a large spherical craft known as the Covered Core. It is, by far, one of the most heavily defended boss ships in the series. It has three blast shields which rotate around the craft and stop at certain intervals. However, these shields never fully stop in front of the barriers that lead to the core, so you can always chip away at the barriers as long as you aim is good. While you attack it, it counterattacks by sending waves of warhead missiles at you from above and below. And endless supply of them fan out and pick a lane to fly through, forcing you to constantly correct the position of the Vic Viper in order to avoid destruction. The good news here is that the Covered Core doesn't actually move too much. It moves in a small circle on the right side of the screen, so you can easily hit it if you have enough Options clustered up near the middle of the screen. Your focus should not be on the Covered Core to the right, but rather on your half of the screen on the left. Watch the warheads as the fly up and down across the screen, and continually reposition your ship so that you don't get struck, but maintain a level of firepower near the barriers and core of the ship. You'll have to survive the onslaught for quite a while before you are able to chip away at the barriers and finally shoot the core.