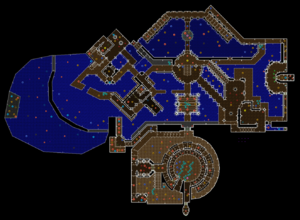 Map of The Guard Tower

The yellow key is located at the north of the map, but you can't reach it yet.

Directly south of the yellow key is a small building with barrels and golems. On the western wall is a switch that raises a bridge to the yellow key.

Once it's raised, grab the yellow key and run before you are damaged by the crushing ceiling.

The yellow key door is directly south of the central building.

Past the yellow key gate is a tower that leads to the exit, but the exit itself is blocked by a green key gate.

The quickest way to reach the green key is by climbing the steps to the right of the yellow door, running to the south-west corner of the room, and jumping down to the floor below. The green key is located in the ground-floor doorway to the central tower, and is behind the right-hand set of barrels.

Once you have the green key, climb up the stairs, enter the tower and take a right turn. Open the door, and climb to the top to reach the exit door.

There is one recognized secret:

The following are not counted secrets, but are helpful: